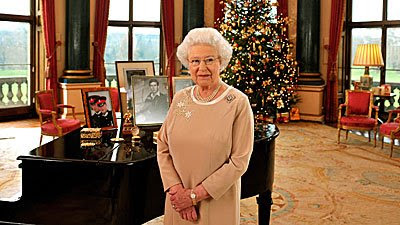 Britain's troubled economy and people's "insecurity" amid today's uncertain times were acknowledged by the Queen in her annual Christmas message to the nation.

Her Majesty recognised the festive period would be a "sombre occasion" for many this year.

But she contrasted the despondency with a tribute to those who live "unselfish lives" to benefit others.

The traditional message, recorded in the Music Room at Buckingham Palace, also included a personal tribute to the Prince of Wales, with the Queen highlighting his achievements and praising the work of her son's charities.

Touching footage from a private home movie showing a young Princess Elizabeth
with Charles, aged just one, was aired during the broadcast.

It comes as members of the Royal Family, including a bearded Prince William, attended a Christmas Day church service on the Queen's estate.

The royals, all spending Christmas at Sandringham House in Norfolk, arrived at St Mary Magdalene Church by car.

Charles and Camilla were the first to arrive, followed by the Duke of Edinburgh and the Duke of York.

Prince Harry turned up with his older brother, who is making the most of some time off from his military duties by growing a beard.

Princesses Beatrice and Eugenie were there, together with Princess Anne and her daughter Zara.

As expected, William's girlfriend Kate Middleton and Zara's boyfriend, the Gloucester rugby player, Mike Tindall were not part of the proceedings.

Sky News' royal correspondent Sarah Hughes, who is at Sandringham, said: "It is not traditional for partners to join the royal family for Christmas until they are at least engaged."

The Queen was the last to arrive at church, sharing a car with the Countess of Wessex.

A British Queen is a sobering figurehead against the endless backdrop of Popes and Bishops herein.
If it wasn't for her supreme governership of the Church of England, many catholics would simply have no spiritual home under papal decree!
It's a pity her Roman brother, the king among equals in the kingdom of Christ couldn't learn a few lessons on true christian behavior from her instead of upsetting people.