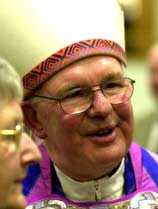 A leading Roman Catholic cleric has warned of the threat of the "darkest night" facing the world in the face of the global economic crisis.

The Most Rev Patrick Kelly, Archbishop of Liverpool, said the world was suffering from a "terrible hangover" of debt and it was already "night" for hundreds of thousands of people.

"The reality we face this Christmas is the threat of a morning after the night before - such a morning that becomes darkest night," he told the congregation at Liverpool's Catholic Cathedral.

"The mountain of debt touching families, cities, countries, continents is a terrible hangover and it is night for hundreds of thousands."

The Archbishop said the Christmas story brought hope and ensured that the darkness would not "overcome" the light.

His remarks were made in a shared homily at Midnight Mass with contributions from church leaders around the Merseyside region.

Organisers said the event had been arranged as an attempt to show the churches' concern and to provide hope and comfort for people affected by the crisis.

Those taking part included the Anglican Bishop of Liverpool, the Rt Rev James Jones and representatives from the Salvation Army, Baptist, Methodist and United Reformed churches.

The Rt Rev Jones said: "The earth is His, and everything in it including us. He loves it all.

"Without Him we have no future and no peace. Liverpool, Europe, the whole world - our common future depends on God's promise to the whole earth."

Major Marion Drew, commander of the Salvation Army north western division, told the congregation that many people had never experienced social and economic "darkness" on such a scale.

She said: "Valleys of darkness exist physically and metaphorically but this year we are more aware of them.

"Many of us today have never experienced social and economic darkness on such a scale - but now face the darkness of financial uncertainty as never before, the evidence of violence in our community, and the oppression of debt.