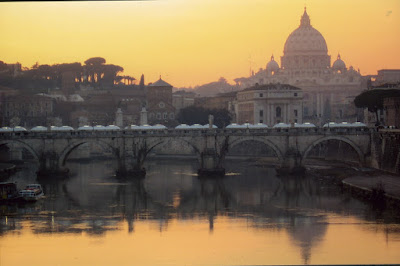 The Catholic Church may be the only institution doing well during the economic crisis.

According to an exclusive from The Tablet's Rome correspondent Robert Mickens, the Vatican may finally have learned (after decades of deficits and fiscal mismanagment and even scandal) how to manage its affairs.

Indeed, the Vatican seems to have developed a gift for prophecy that Wall Street could learn from.

The piece, "Church with a Midas Touch," is based on a confidential report sent to the world's bishops, who, together with donations from the faithful, support the Vatican.

The Holy See actually has few resources of its own, unless one wants to sell of the Pieta.

The report isn't that transparent, and much as to be taken on faith. The Tablet piece is only available to subscribers, but here are a few (gold) nuggets:

--The Holy See's total assets at the end of last year added up to nearly 1.4 billion euros or more than £1 billion. It reveals that the Vatican's financial advisers shrewdly spotted the risks of keeping the Church's money tied up in shares and switched to safer investments, including gold. The Holy See owns almost a ton of gold which in today's volatile market would be worth some £15 million. (The math? Maybe $30 million?) That's a decent sum, though hardly the endowment of a decent U.S. university.

--The Holy See's most costly ventures are Vatican Radio, which in 2007 ran at a 24.3 million euro (£19.2m) deficit, and its newspaper, L'Osservatore Romano, which lost about 4.8m euros (£3.8m). Another interesting detail is that salaries, taxes and other expenses for some two dozen cardinals who work in the Roman Curia run to more than 3m euros
(£2.37m) a year.

--The report is for the Holy See, not the Vatican City State--the church's 108-acre physical "plant" with a post office, fire department, museums and such--which actually makes a few million a year. Nor does it include any accounting for the somewhat infamous Istituto per le Opere Religiose (IOR)--the "Institute for religious Works, more commonly known as the Vatican Bank.

--The Holy See's biggest expenses go toward paying its personnel. There are salaries, pensions and health-care costs for some 2,748 employees and 466 pensioners. The workforce is made up mostly of lay people (1,212 men and 425 women), followed by diocesan clergy (778) and members of religious orders (243 men and
90 women). They cost the Holy See upwards of 77m euros (£61m) in salaries and more than 100m euros (£79.2m) in pensions and other benefits.

Some will of course see this financial planning as the crass calculations of an institution that should give all to the poor.

Others may see it as some welcome stewardship.

One would assume after 200O+ years the vatican would be bought and paid for with enough left to build another 100 dozen considering the amount of people who've bought their way into heaven.

Still the Holy tills of Rome ring their dulcit tones in earshot of the fathful calling them to impart with their cash for the impoverished bank of Rome with as many black holes as Space it would seem.