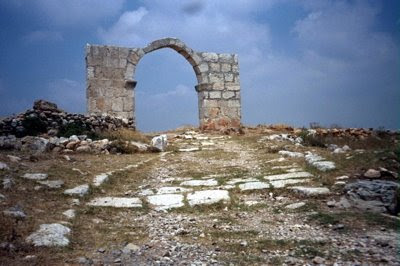 When Pope Benedict XVI declared 2008 the Year of St. Paul, the Mediterranean province of Tarsus had high hopes that, as the saint's birthplace, it would see increasing attention from foreign tourists.

Members of the tourism industry say, however, they have been disappointed with the attention the event has garnered.

The year 2008 was the bimillenial of the birth of St. Paul and Taurus hoped to play a pivotal role in this anniversary, but the province's expectations have been largely unfulfilled.

Speaking to the Anatolia news agency, Tarsus Chamber of Trade and Industry Chairman Mehmet Karagözlü said Tarsus was disappointed by the lack of attention. He said they had promoted the city with the support of various organizations but had failed to draw high numbers of tourists.

Karagözlü said the Year of St. Paul had seemed a golden opportunity for Tarsus, which is regarded by the Vatican as the pilgrimage destination. He said they had held an opening ceremony in the garden of the St. Paul Church with the participation of Cardinal Walter Casper, the head of the Pontifical Council for Promoting Christian Unity; Luigi Padovese, the apostolic vicar of Anatolia; Antonio Lucibello, ambassador for the Vatican; Gabriele Caccıa, Vatican secretary of state; Mehmet Emin Özafşar, vice president of the Ministry of Religious Affairs; and a number of guests.

"We expected before and after the ceremony that a great number of foreign tourists would come to the city. We had talks with tradesmen about the production of souvenirs unique to the city. But tourists' visits were very short and they didn't purchase even these souvenir products. Restaurants and cafes serving Tarsus cuisine were disappointed too. In brief, St. Paul year fell short of expectations," he continued.

He said they hoped a plan to print brochures in different languages and send them to target countries would interest in the remaining few months of the year. "We are planning to go to the Vatican and have talks to bring more tourists to Tarsus. I hope that the rest of the year will be better for us."

Karagözlü said they were also working with tour agencies to improve the city's promotion. He said the agencies would work toward making it possible for tourists to stay and enjoy the city for a full day. Complaining about the insufficient number of tourist facilities in Tarsus, Karagözlü said, "This problem will be overcome thanks to the Kazanlı-Tarsus Coastline Project. The problem of hotel and bed capacity will be solved by 2010. We have plans with Mersin Mayor Hüseyin Aksoy regarding this issue." +++++++++++++++++++++++++++++++++++++++++++++++++++
Disclaimer

We hate you Gospel but we love your Money!

Did you hear the one about the Rabbi, Mullah & the Priest?

The Rabbi said, "Our Talmud allows us to have sex with a 3 year old child"!

A girl who is three years of age and one day may be betrothed by cohabitation. . . .(. Yebamoth 57b)

The Mullah said, "WE are allowed to thigh with a 6 year old child & have full sexual intercourse with her when she is 9; like Muhammad did with Aisha."

'A'isha (Allah be pleased with her) reported: Allah's Apostle (may peace be upon him) married me when I was six years old, and I was admitted to his house when I was nine years old. Book 8, Number 3310

The Reverend Father Oliver O'Grady told the reporter of the Boston Globe:

Asked to demonstrate how he would lure one of his estimated 25 victims into his arms, the 59-year-old Irish native softened his voice, flashed an avuncular smile and looked directly into the video camera.

"Hi, Sally," O'Grady improvised. "How are you doing? Come here. I want to give you a hug. You are a sweetheart. You know that. You are very special to me. I like you a lot." If his hug met no resistance, O'Grady testified, he would take the child's compliance as "permission" to molest. The deposition came in connection with lawsuits filed against the Stockton Diocese over alleged abuse by clergy. Mahony, who was bishop of Stockton from 1980 to 1985 before heading the Los Angeles Archdiocese, inherited O'Grady, who had admitted years earlier to molesting an 11-year-old girl. In 1984, police investigated a therapist's report that O'Grady had molested a boy. After police declined to file charges, Mahony transferred O'Grady to a rural parish and later promoted him to pastor there, where he allegedly molested three more victims, including a baby girl who suffered vaginal scarring, according to plaintiffs' lawyers.