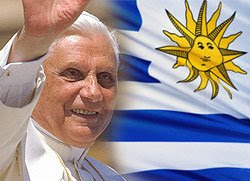 In his address to the bishops of the Episcopal Conference of Uruguay, Pope Benedict XVI encouraged the prelates to teach "the faith of the Church in its entirety" and not to shy away "from an explicit proclamation of the moral values of Catholic doctrine."

The Holy Father addressed the bishops in the Apostolic Palace of Castel Gandolfo during their ad limina visit. The Pontiff reminded them that often these moral values "are the subject of debate in political and cultural circles and in the communications media, such as those referring to the family, to sexuality and to life from conception to natural end."

"A visit to the tombs of St. Peter and St. Paul," the Pope told them, "provides a good opportunity to delve more deeply into the significance of the ministry of the successors to the Apostles." It is "an opportunity to reinforce the bonds of effective and affective unity among the college of bishops, which must demonstrate the ideal of the ecclesial community since its origins: that of 'oneness of heart and mind', a visible example to promote a spirit of fraternity and harmony among your faithful, and in modern society so often dominated by individualism and rivalries."

Such communion also appears, the Holy Father noted, in the Uruguayan bishops' implementation of pastoral guidelines inspired in Jesus' meeting with the disciples in Emmaus, when "the Master, who accompanied and conversed with His companions, explained the Scriptures to them."

This can be done by "promoting knowledge of and meditation upon Sacred Scripture, explaining it faithfully in preaching and catechesis, or teaching it in schools, is vital in order to for people to live their Christian vocation with greater awareness, firmness and security."

"The Word of God is also the source and content of your ministry", said the Pope, "even more necessary at a time in which many voices seek to silence God in personal and social life, leading mankind along paths that undermine true hope and disregard the firm truth in which the human heart can find rest."

The Pope later explained that to accomplish its task, the bishops have the support of "the priceless collaboration of priests, who should be constantly encouraged so that, without bowing before the dominant mentality of the world, they remain true disciples and missionaries of Christ, carrying His message of salvation ... to everyone who thirsts for words learnt of the Spirit rather than purely human knowledge."

"In this way they will bear faithful witness of what they preach, and help their brothers and sisters to flee a purely superficial religiosity and ... learn from Christ to love 'in justice and sanctity of life'," he continued.

Finally, Benedict XVI encouraged the prelates not to become discouraged "in so many situations of religious indifference or apathy," and continue to be bearers of "the hope that does not disappoint" and of "Christ’s love for the poor and needy."