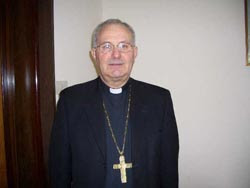 Catholics need to wake up when it comes to politics, and stop leaving "God in the pew," says a Vatican aide.

Bishop Giampaolo Crepaldi, secretary of the Pontifical Council for Justice and Peace, said this today when he addressed a conference organized by Retinopera, a network of Italian organizations that promote the Church’s social teachings.

The meeting, under way in Assisi, is reflecting on the idea of the common good and, according to its organizers, seeks "to consider development understood as a moral question."

Bishop Crepaldi said Benedict XVI’s call in Cagliari, Sardinia, earlier this month for “the birth of a new generation of Christians involved in society and politics” was addressed to the Christian communities "who, as far as the formation new generations involved in society and politics is concerned, seem to be falling asleep.”

The bishop explained the need for Catholic laity involved in politics in the context of the "the idea, perhaps unexpressed, that secularization is an unstoppable process, a kind of ‘destiny’ of the West if not the entire planet.”

“Secularization, as God’s ejection from the world to the point that he ceases to speak to it, is not the destiny of modernity,” the bishop remarked.

The prelate noted this is precisely “the principal challenge" that Pope John Paul II faced, and that Benedict XVI is currently confronting. "We must confidently join them as real protagonists, and not see ourselves as tired bit players in a script recited by others."

The 61-year-old bishop emphasized that “the social teaching of the Church is an instrument of evangelization and education in the faith.”

He warned of the effects of pluralism “on our communities, even on the unity of faith, unity in regard to the foundations of culture, on the sense of ecclesial belonging, on fidelity to [the Church’s] pastors.”

Bishop Crepaldi pointed out that “when it is claimed that Christ is only useful, but not indispensable, for man’s understanding of himself and finding truly human solutions to development,” and when we “support certain forms of pluralism without truth,” then “we have gone beyond the bounds of legitimacy.”

He reaffirmed that “God cannot be left in the pew” and that religion and faith “must not be excluded from public life or used only for limited pragmatic goals.”

“Secularist ideology is not neutral," he warned, "but rather imposes an absolute vision."

“Presenting a world without God is not synonymous with scientificity, objectivity, evaluative equanimity,” the bishop said, adding that “those who decide to remove the crucifixes” are not “neutral,” but “want a public space without crucifixes.”

“If God disappears from the public square,” Bishop Crepaldi said, “our capacity to recognize the natural order, purpose and the ‘good’ begins to disappear.”

To avoid these dangers and renew the Christian community, the secretary for the Pontifical Council for Justice and Peace indicated the urgency of a basic formation, beginning with the social teachings of the Church.

He urged learning and teaching the Compendium of the Social Doctrine of the Church: "This Compendium is often cited but little read, it is celebrated on many occasions, that is, ‘occasionally,’ but never seriously adopted.”

In regard to the political and social involvement of Catholics, Bishop Crepaldi noted: “Sometimes they censor themselves preventatively when they must enter and work in the public arena […] believing that this arena cannot permit references to faith and religion.

"But it is precisely in this way that God disappears from the public square. Silently. By omission.”

Touching on the immediate challenge, the archbishop called for an end to “identity repression” and for the support of “conscientious objection.”

In this context he cited several examples: “Catholic agencies in the United Kingdom who are fighting for their right not to participate in adoptions by homosexual couples, which have been permitted by law”; “doctors and health workers who ask to be able to object not only to traditional abortion but new abortifacient drugs”; “civil authorities who refuse to register homosexual couples in the registries provided by the laws that recognize them in various ways.”

To defeat future challenges, individual resistance will not be enough, the prelate observed.

In this respect he voice his agreement with Cardinal Angelo Bagnasco, archbishop of Genoa, who has said that the Church is “of the people.”

“Being ‘of the people,’” Bishop Crepaldi explained, “is not just a sociological datum; it is a theological datum that has to do with the Church’s relationship to the world. […] And it is precisely from the development of this dimension that the new generation that Benedict XVI called for in Cagliari can be born.”