Paul did not invent Christianity: Pope 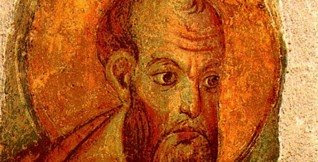 St Paul did not invent Christianity, Pope Benedict said Wednesday in his General Audience talk, noting the Apostle's relationship with the Twelve and with Peter.

The importance that Paul gave in his letters to sacred Tradition proves false the claim the Apostle invented Christianity, the Pope said the latest in a series of catecheses on St Paul, Zenit reports.

Pope Benedict spoke about St Paul's relationships with the Twelve, which he said were "always marked by profound respect and by the frankness that in Paul stemmed from the defense of the truth of the Gospel."

He particularly stressed the relationship with Peter, noting that the Apostle to the Gentiles stayed with the first Pope for 15 days to learn about Christ's earthly life.

During Paul's time with the Twelve, the Pontiff explained, he received teaching on central elements of the Christian tradition. He then transmits this Tradition faithfully.

Pope Benedict particularly noted passages from Paul's First Letter to the Corinthians where the Apostle explains the Christian faith on the Eucharist and the Resurrection.

"The words of Jesus in the Last Supper really are for Paul the centre of the life of the Church," the Pope explained.

And the "other text, on the Resurrection, transmits to us again the same formula of fidelity," he continued.

"The importance that [Paul] bestows on the living Tradition of the Church, which she transmits to her communities, demonstrates how mistaken is the view of those who attribute to Paul the invention of Christianity," the Pope said.

"Before proclaiming the Gospel of Jesus Christ, he encountered him on the road to Damascus, and met him in the Church, observing his life in the Twelve, and in those who had followed him on the roads of Galilee. [...]

"The mission received on the part of the Risen One in order to evangelise the Gentiles must be confirmed and guaranteed by those who gave him and Barnabas their right hand, in sign of approval of their apostolate and evangelization, and of acceptance in the one communion of the Church of Christ."

"The more we try to follow in the footsteps of Jesus of Nazareth on the roads of Galilee, so much the more will we understand that he has taken charge of our humanity, sharing in everything except sin," the Pope concluded.

Tune in next week folks for more of Joey Ratzniger's Iron Age Fantasies.