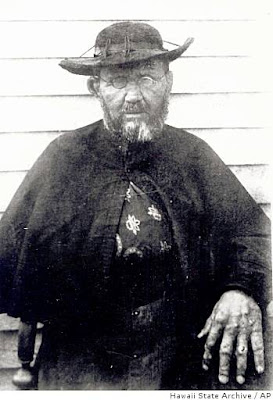 In a state known for bustling, exciting tourist destinations such as Waikiki and the Kilauea volcano, Kalaupapa is sacred ground with a history of disease, suffering and isolation.

About 8,000 people have died on this remote peninsula since the Hawaiian Kingdom started exiling leprosy patients here in 1866.

Many were torn from their families and left to scrounge for shelter, clothes and food. The vast majority were buried in unmarked graves.

Today, visitor interest in Kalaupapa, on the northern edge of Molokai island, is growing. And it will likely increase when the Vatican proclaims Father Damien - the 19th century priest who cared for the leprosy patients - a saint, most likely late next year.

The two-dozen patients still living here are eager to celebrate Kalaupapa's most famous resident, a selfless man who cared for leprosy patients when many others shunned them. They would welcome pilgrims at Damien's church and grave.

But therein lies a dilemma. The patients and their supporters also don't want throngs of tourists disturbing the community's privacy and desecrating the land.

Kalaupapa's attraction for tourists and pilgrims is heightened by the dramatic story behind the Vatican's recognition of a miracle attributed to Damien, who died in 1889 after contracting leprosy himself. It's this miracle that cleared the way for sainthood.

Audrey Toguchi, an 80-year-old Catholic from the Honolulu suburb of Aiea, came to Kalaupapa 10 years ago to pray for help at Damien's grave after she was diagnosed with terminal cancer. Less than a year later, Toguchi's cancer disappeared.

In July, Pope Benedict XVI ruled Damien had intervened because there was no scientific explanation for her recovery.

Kalaupapa is dramatically isolated, a peninsula cut off by 2,000-foot cliffs and surrounded by ocean. It can be reached only by small plane, mule ride or a one- to two-hour hike. Only 100 people live here, including the patients and care workers.

The state Department of Health limits visitors to Kalaupapa at 100 per day, and each visitor must obtain a permit. On average, only about 25 make the trip.

Terryl Vencl, executive director of the Maui Visitors Bureau, which promotes Molokai tourism, expects more people will want to visit but isn't sure how many. The bureau has no plans to market tours after Damien is canonized but will give travel agents information about Kalaupapa.

Lawmakers, state officials and the National Park Service, which operates a historical park at Kalaupapa, all promise they won't allow the visitor cap to be raised without approval from the remaining patients.

Anwei Law, a historian who has been coming to Kalaupapa for almost 40 years, said visitors need to remember that Kalaupapa is not just another tourist attraction.

"It's a sacred place because you've had so many people live there and die there," said Law. "It's a place where people had everything taken from them, but their response was not one of hatred."

Leprosy, also known as Hansen's disease, is spread by direct person-to-person contact, although it's not easily transmitted. It can cause skin lesions, mangle fingers and toes, and lead to blindness.

But it has been curable since the development of sulfone drugs in the 1940s, and people treated with drugs aren't contagious. Hawaii did away with the exile policy in 1969.

Patients sent here before 1969 are free to leave, but many have chosen to stay because it has become their home.

The state has promised to keep the settlement open and care for patients until the last one dies. The youngest is now 67.

After that, the National Park Service will take over management of the peninsula.

The kingdom began strictly enforcing its isolation policy in 1873 - the year Damien arrived - sending hundreds of people to Kalaupapa even though there was no housing for them and no doctor to care for their sores. They were expected to build their own homes, grow their own food, and make their own clothes even though many of them were profoundly sick.

When a resident doctor finally arrived in 1879, he wouldn't touch anybody and left medicine on a fence post.

Damien, born in Belgium as Joseph de Veuster, stood out because he stayed and put no barriers between himself and the patients. He built homes, constructed a water system and imported cattle. He had no medical training, but he did have a medical book and a bag, and he made rounds washing and bandaging patient's sores.

He shared his pipe with patients and ate from the same bowl. Even before he contracted Hansen's disease, Damien began his sermons saying "We lepers."

Damien was diagnosed with leprosy 12 years after he arrived at Kalaupapa and died four years later, at age 49. He's the only health care worker in Hawaii who ever contracted Hansen's.

Henry Nalaielua, 83, a patient who moved to Kalaupapa in 1941, said that it would be a glorious day when Damien is canonized and that he would welcome pilgrims.

"I know all of us hope that he does become a saint," said Nalaielua, a Catholic. "And that his church here will maybe become a shrine, instead of just Father Damien's church."

Even so, patients and their supporters are firm in wanting to retain the 100-person-per-day limit, even if more people want to come seeking another Damien miracle.

"You have to realize that the patients are still here," said patient Gloria Marks, 70.

Law, the historian, said the limit on visitors should be maintained even after the last patient dies.