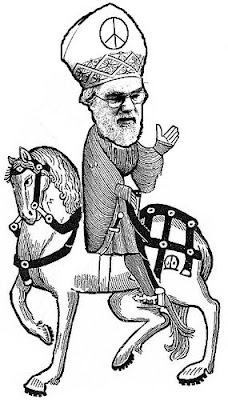 Rowan Williams broke with two long-standing Anglican taboos yesterday by becoming the first Archbishop of Canterbury officially to visit the French Catholic shrine at Lourdes and by offering at least limited support for Karl Marx's condemnation of unbridled capitalism.

Either gesture in past times would have incurred the wrath of hardliners, but responses were muted.

At Lourdes, where Williams is on a pilgrimage with other Anglicans, he spoke during a sermon of the example of St Bernadette, the peasant girl whose apparent visions of the Virgin Mary in a grotto near the Pyrenean town exactly 150 years ago made Lourdes a place of pilgrimage. Williams said the experience of coming to a place soaked in the hopes of millions could help believers to experience the "deep and mysterious" joy of God.

"Our prayer here must be that, renewed and surprised in this holy place, we may be given the overshadowing strength of the spirit to carry Jesus wherever we go, in the hope that joy will leap from heart to heart in all our Christian encounters," Williams said in his address, during a mass celebrated by his friend Cardinal Walter Kasper, president of the Vatican's Pontifical Council for Promoting Christian Unity, who has been scathing about the state of the Anglican church in recent months.

Williams, who comes from Anglicanism's Anglo-Catholic wing, was visiting the shrine a week after Pope Benedict XVI marked its anniversary. Although the archbishop has visited the best-known Anglican shrine in England, at Walsingham, Norfolk, Lourdes' status and character has often aroused Protestant suspicion.

Some bloggers yesterday drew attention to the Tudor-era founding statutes of the Church of England, which warn against the invocation of saints as "a fond thing, vainly invented and grounded upon no warranty of scripture but rather repugnant to the word of God".

The archbishop invoked idolatry when writing about the credit crisis in this week's Spectator magazine. The self-styled hairy leftie says: "To grant that without a basis of some common prosperity and stability, no speculative market can long survive is not to argue for rigid Soviet-style centralised direction ... Without a background of social stability, everyone will eventually suffer, including the most resourceful, bold and ingenious of speculators.

"Marx long ago observed the way in which unbridled capitalism became a kind of mythology, ascribing reality, power and agency to things that had no life in themselves; he was right about that, if about little else. Ascribing independent reality to what you have in fact made yourself is a perfect definition of what the Jewish and Christian scriptures call idolatry." +++++++++++++++++++++++++++++++++++++++++++++++++++
Disclaimer