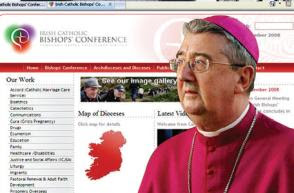 That was the word employed this week by the Primate of All Ireland, Doctor Sean Brady, to launch the Church's new website, catholicbishops.ie.

Addressing the global reach of the internet, the Archbishop described it as "an awesome tool of communication", adding that he regarded it as "the single most revolutionary communications medium of all time".

The Archbishop of Dublin, Dr Diarmuid Martin, chimed in with his view that the time has come for the Catholic Church to shake off old attitudes to new technology. The Archbishop admitted: "Having lived in the Vatican for many years I realised that the Vatican was not the best place to be to develop an IT culture.

"This had nothing to do with theological narrow-mindedness or worries of IT being used for less than desirable purposes. It was simply a question of a culture that was used to the written and printed world for so many centuries, having difficulties in adapting to the virtual world."

He chided: "Many Church people today are slow about IT. Some seem proud to say that they will never master the techniques. But they have nothing to be proud of."

Dr Martin added that information technology is a gift from God "mediated through the genius of men and women" which must be used wisely. He stated: "Not to use it, to refuse to understand it, is to reject a gift from God."

The new website, which is run under the auspices of the Irish Bishops' Conference, embraces a broad range of issues spanning bioethics (reproductive issues) to the treatment of overseas prisoners and refugees. One feature which catches the eye is the daily online broadcast of mass which allows the user to tune in to live ceremonies.

In going online, the Irish church is taking its lead from Pope Benedict XVI.

On October 5 the Pontiff will read aloud the first chapter of the Book of Genesis over the internet.

The reading will then be continued by an estimated 1,200 volunteers who will recite the entire Bible through to the closing Book of Revelation.

But back to Cardinal Brady's intriguing use of the word "awesome". Was it a conscious borrowing from the slang style of the Bill And Ted movies, in an effort to speak directly to the young people of Ireland? Or was the word employed in its original sense of inspiring awe?

Tony Bolger, the CEO of Church Support Limited, the company which operates the website catholicbishops.ie, is not sure what the Cardinal had in mind. He says: "It's not a phrase I grew up with myself, and not one I'd often use."

Kathy Tynan, Communications Officer with the Catholic Bishops' Conference says: "We're not necessarily trying to attract a young audience. It's more about communicating in a way that connects people, and the internet is increasingly the way that people communicate."

Tony Bolger elaborates: "When we broadcast online Mass, it's to a broad parish that can be worldwide. The basic unit of Christian life is the parish, but the boundaries of that parish have moved and become blurred. Fifty years ago everyone would have walked to their parish church, but now you can access the centre of that parish from anywhere in the world. There are new rules and we are working to come to terms with them."

The new website draws attention to the fact that tomorrow (September 28) is Priesthood Sunday. The website invites "the lay faithful of all parishes in the country (to) develop their own special way of marking the day and honouring their parish priests both at Mass and other parish events".

Somewhat bravely, the website openly acknowledges "the clergy sex abuse scandal" of the past, while urging that "the sins of the few do not reflect the innocent majority". The stated purpose of the day is to "bring priesthood back on the menu (as a) valid and meaningful option for men, especially younger men".

After a decade on the back foot, is there a sense that the Church is stepping into the age of new technology with a renewed sense of self-confidence?

"That's one way of interpreting it," says Tony Bolger. "There were a lot of people hurt by the abuse scandals. People have been hurt and things have to happen to restore faith in the Church, but those things have been happening."

One section of the website is dedicated to archive material from Pope John Paul II's visit to Ireland in 1979.

There has been much speculation that his successor Benedict will arrive here next summer to mark the 30th anniversary of that visit. Is that speculation well founded?

Everyone's been wondering where the hell they've been for the last ten years. How long will it take for the first Papal Bull's to arrive by email? lol