Five US chaplains lose jobs for praying 'in Jesus' name' 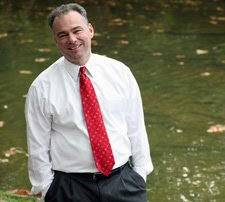 Virginia Governor Tim Kaine is defending how his administration forced the sudden resignation of five Virginia State Police Chaplains because they prayed publicly "in Jesus' name."

Police Superintendent Col. W. Steven Flaherty single-handedly created, then enforced, a strict "non-sectarian" prayer policy at all public gatherings, censoring and excluding Christian prayers, then accepted the resignation of five chaplains who refused to deny Jesus or violate their conscience by watering down their prayers.

Defending Flaherty's persecution of Christian Chaplains, Governor Kaine indicated he himself was being persecuted, saying through his spokesman: "It is disappointing that Del. Griffith would make such a political attack on Gov. Kaine about his faith."

Former Navy Chaplain Gordon James Klingenschmitt, who was also fired in 2007 for praying "in Jesus' name" in uniform (but won the victory in the U.S. Congress for other military chaplains), weighed in:

"Governor Kaine campaigned like a Christian to get our votes. But now, instead of governing like a Christian, or respecting his own chaplains' First Amendment rights, his administration forced the resignation of five police chaplains, simply because they prayed publicly 'in Jesus' name.'

The moral of that story is, Pray in Private statesmen! - for what the Father sees in private, he rewards in public and the people you were appointed to serve will reap the rewards with you.