What would Jesus do? Scholars look at morality in the Bible 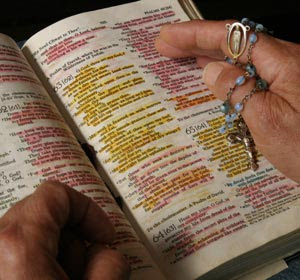 Even when it comes to morality, Catholics are not biblical fundamentalists, although they view the Bible as an important source of moral guidance, said top Catholic scholars.

The various books of the Bible were written in different epochs, in different cultures and by different authors, the scholars said, so when looking for moral precepts, a Christian cannot focus on just one line.

In their new document, "The Bible and Morality," the scholars on the Pontifical Biblical Commission said biblical morality is not so much a set of dos and don'ts as it is a set of principles meant to help Christians grow in perfection and contribute to establishing God's kingdom on earth.

The English translation of the document rolled off the Vatican printing press Sept. 24, less than two weeks before the opening of the world Synod of Bishops on the Bible.

In the 235-page booklet, the biblical scholars presented two main criteria for judging human actions or potential actions: Does it protect and promote the dignity of the human person? Does it conform to something Jesus would do?

With those two criteria in mind, and taking into account the fact that some biblical precepts are repeated so often that their ongoing validity cannot be denied, the scholars addressed only a very few specific moral questions.

Acknowledging a development in morality throughout the Old Testament and culminating with the teaching of Jesus, they said the Bible: clearly insists on protecting human life from conception to natural death; defends marriage as the lifelong union of a man and a woman; obliges human beings to safeguard the environment; and insists that priority be given to the needs of the poor, the weak and the sick when making decisions.

The scholars opened their document with a reprint of the Ten Commandments and the beatitudes from the Gospel of Matthew's account of the Sermon on the Mount.

The biblical idea of morality is more than "a code of behavior to be adopted or avoided" or "a list of virtues and vices to be practiced or countered" in order to protect individuals and society, they said.

For Christians, living according to biblical morality is a spiritual quest, the document said, and striving to act in a morally upright manner is a response to God's gift of love and his willingness always to forgive.

The Ten Commandments are not the harsh part of a carrot-and-stick approach God takes to dealing with humanity, but contain the principles necessary so that each person and all people together can deal responsibly with the freedoms God has given them, the scholars said.

The commandments promote the values of paying homage to God, recognizing his presence in the world, recognizing that time has a sacred value, honoring the family, upholding the right to life, safeguarding marriage, defending human freedom and dignity, protecting people's reputations, respecting their family and group ties and respecting personal property.

The scholars said the commandments "are presented in decreasing order of value, from the most to the least important," with God at the top and material goods at the bottom.

Unfortunately, they said, modern societies often seem to assign value in the completely opposite way, not just putting human beings before God, but putting material goods before people.

In his life and in the Sermon on the Mount, they said, Jesus literally radicalized the values promoted by the Ten Commandments, urging his listeners to strive toward perfection in truly being an image of God in the world.

For the scholars, that striving is a key point of biblical morality: Just as God revealed himself and his plan for salvation over time, the human response to God's gift is something that naturally occurs in stages and includes failures, forgiveness and starting again

The Eucharist is both nourishment to strengthen believers and the renewal of Christ's total sacrifice, which reminds believers that they must never be content with divisions and moral failures, they said.

"Unless there is obstinate resistance on the part of individuals or the community, participation in the Eucharist will always be a strong call to conversion and the best means to give new vitality to the covenant, which renews the life and conduct of the church and, through the church, of the world," they said.

As some 250 bishops prepared to gather at the Vatican for the synod discussion on "The Word of God in the Life and Mission of the Church," the biblical commission document reminded readers that what the Bible reveals is not a specific moral code, but God himself.