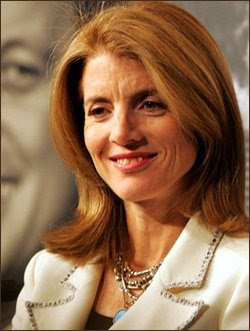 Rome’s diplomatic community is abuzz with rumors that Caroline Kennedy could become U.S. ambassador to the Vatican under an Obama administration.

The daughter of John F. Kennedy, the nation’s first and only Catholic president, has been mentioned for some sort of high-level position since she endorsed Sen. Barack Obama in January, when she wrote an op-ed column for The New York Times entitled “A President like My Father.”

As a payback, commentators have speculated for some time that a prominent diplomatic role is a possibility. Before Sen. Joe Biden was chosen in August, Kennedy was proposed as a possible vice presidential candidate (she served instead on Obama’s VP selection committee).

Diplomats in Rome dismiss the rumor as idle speculation. But one said Kennedy would be well suited to the role in view of her background, contacts and that she is a practicing Catholic.

“States have a tradition of appointing high-profile and well-connected candidates to the Holy See,” he told Newsmax on condition of anonymity. “A posting here is more high profile than say Moscow or Tokyo where the ambassadors are not household names.”

She also “has the advantage of coming from a Catholic dynasty,” he said.

Also running in her favor is the fact that she is not divorced or remarried – an automatic bar to diplomats appointed to the Holy See – and she has taken an active role on social justice issues, in particular working to improve New York City schools.

Although Kennedy is no stranger to diplomatic life (her grandfather, Joseph Kennedy, was ambassador to the Court of St. James in London during World War II), she has no diplomatic or government experience. Married to the artist Edwin Schlossberg, she also prefers to stay out of the limelight and, as a mother of three teenage children, may not be willing to make the move overseas.

The Vatican, meanwhile, is cautious about any diplomatic appointees whose views on abortion, euthanasia, or other nonnegotiable issues are at odds with church teaching. As a very private person, Kennedy’s views on these issues are unclear (she did not mention her Catholic faith or Obama’s radical abortion rights policy positions in her op-ed endorsement).

The suspicion is that, even if Kennedy agrees with church teaching, she probably takes the same line as many other Catholic Democrats: that politicians should not impose their faith on the American public, especially regarding abortion.

The church considers such a view as unacceptable and dangerously misleading. Ironically, often the blame for this approach, and for the general drift of the Democratic Party toward an abortionist position, is laid at the feet of John F. Kennedy, who made a point of pledging not to let his faith influence his politics.

President Kennedy was intent on playing down his Catholicism, to the extent that he opposed improving relations with the Vatican. He ruled out any formal links with the Holy See despite a willingness among Vatican officials to establish diplomatic relations – something that did not occur until 1984, under President Reagan.

If Caroline Kennedy were appointment, it could be useful for the Democrats in seeking the Catholic swing vote.

First things first - got to get Obama elected. ESSENTIAL