John Paul I in “people’s hearts” for his humility, Pope says 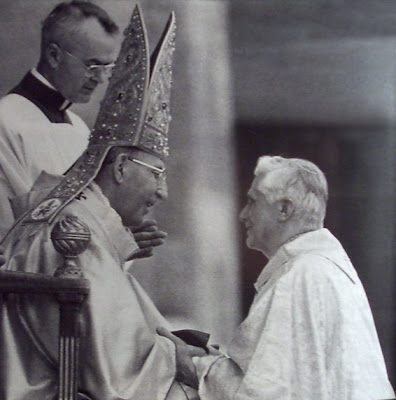 The Pope’s last Angelus from Castel Gandolfo before his return to the Apostolic Palace in the Vatican next Tuesday is dedicated to John Paul I, the Pope of humbleness.

Benedict XVI’s point of departure was today’s liturgy which was about the “two sons sent by their father to work in his vineyard. One said yes right away; the other initially refuses only to repent later and then accept to fulfill his father’s wish.”

“With this parable Jesus confirms his predilection for sinners who convert,” the Pope explained.

“He teaches us that we need humility in order to receive the gift of salvation.”

For the Pontiff Jesus “is the humble servant par excellence.” And with that he remembers John Paul I who died 30 years ago today.

Pope Luciani, said Benedict XVI, “chose Saint Carlo Borromeo’s Episcopal motto—Humilitas— as his own, a word that sums up that which is essential in Christian life and which indicates the virtue needed by those in the Church who are called to serve the authorities.”

“In one of the four general audiences held during his brief pontificate he said among others things and in that very informal way of his: ‘I will just recommend one virtue so dear to the Lord. He said, ‘Learn from me who am meek and humble of heart.’ [. . .] Even if you have done great things, say: ‘We are useless servants.’” He noted: ‘On the contrary the tendency in all of us, is rather the contrary: to show off’ (Insegnamenti di Giovanni Paolo I, pp. 51-52).” Thus humility can be considered as his spiritual testament.

Thanks to this virtue of his, only 33 days were necessary for Pope Luciani to enter people’s hearts. In his speeches he used examples taken from real life, from his own family memories and from the wisdom of ordinary folks. His simplicity was a tool to formulate solid and vivid teachings which he enhanced by frequent quotes from Church and secular writers that he could recall thanks to an exceptional memory and a vast culture. He had been a catechist without equals, following in the footsteps of Saint Pius X, his compatriot and predecessor on the chair of Saint Mark and then Saint Peter.

“We must feel small before God,” he said during that same audience. “I am not ashamed to feel like a child before his mother,” he added; “one believes in one's mother; I believe in the Lord, in what he has revealed to me (Ibid, p. 49). These words show the strength of his faith. As we thank God for having given him to the Church and the world, let us cherish his example and commit ourselves to the same humility that made him able to speak to one and all, especially to the little ones and the so-called “far away”.

Before saying goodbye to the pilgrims, Benedict XVII thanked the community of Castel Gandolfo for their hospitality, noting that on 19 October he will go on pilgrimage to the shrine of Our Lady of Pompei in the month dedicated to recitation of the rosary.

Speaking to Polish pilgrims he said that today in Białystok, (Poland) the servant of God Michał Sopoćko, confessor and spiritual guide of Saint Faustina Kowalska, was beatified.

“Thanks to his suggestion,” said the Pope, “the Saint wrote her mystical experiences and the apparitions of the merciful Jesus in her well-known diary.”