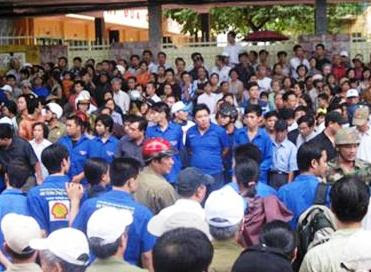 A new attack was carried out yesterday afternoon against Catholics praying in front of the compound that once housed the apostolic delegation.

An iron cross on the property was destroyed and a statue of the Pietà, which was in the building before it was seized by the authorities in 1959, was taken away.

The thugs (in photo wearing a blue overall) arrived at 4 pm. Following a well-established Stalinist scenario state-owned buses delivered youth, military veterans and other communist associations to express what one agent called “the fury of people” against Catholics, especially the archbishop.

Nguyen The Thao, chairman of the capital’s People’s Committee (City Hall), described Catholics as “a danger”, calling on the people to defend the state.

Once on site the bully-boys playing out their role in this tragic comedy threw themselves at the Catholics at prayer, and then moved to the nearby archbishop’s office, shouting slogans against the archbishop and in praise of Communism.

In the building priests and employees locked down the doors as police, out in large numbers, stood idly by. Some agents even helped the mob destroy the iron cross erected in January in the former delegation’s garden and wheel away the statue of the Pietà that was in the building.

Some Catholics found refuge in St Joseph Cathedral where they rang the bell to call for help from the faithful in nearby parishes.

Only then did police order the thugs away to avoid a clash with the people who were rushing to the site.

In a development on the legal front, on Wednesday Fr Nguyen The Hien of the Hanoi Redemptorist Monastery went to People’s Committee to demand respect for the law.

“According to the current law, there are three legal recourses against the authorities’ decisions. After that if our petition is still rejected we can go to court. Why,” he told the authorities, “did you announce the decision to convert the disputed property into a park when only our first recourse was rejected and we can still proceed lawfully?”