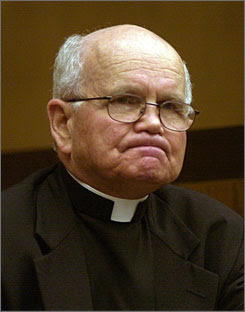 Roman Catholic Archbishop Alfred Hughes has denounced a lawmaker's proposal to pay poor people to undergo sterilization as "an egregious affront to those targeted and blatantly anti-life."

"Our lawmakers would do better to focus on policies that promote education and achievement to counteract poverty and the bigotry of low expectations, " Hughes said in a statement Thursday.

Hughes spoke out in response to a proposal by state Rep. John Labruzzo, a Republican from suburban Metairie, to combat poverty by offering poor women and men $1,000 to undergo reproductive sterilization and vasectomies. In addition, the lawmaker said he is considering whether to propose tax incentives for college-educated people to have more children.

Hughes appears to be the first major local clergyman to take a public stand on the issue, which Labruzzo broached Tuesday. Archdiocesan spokeswoman Sarah Comiskey said the Catholic Church would oppose Labruzzo's plan in Baton Rouge if he turns it into legislation.

Hughes based his opposition on two elements of Labruzzo's proposal: the technique of direct sterilization and the underlying purpose of manipulating the birth rate to reduce certain populations as a matter of public policy.

Catholic teaching holds that tubal ligation and vasectomy are wrong, because they rob sexuality of one of its main purposes, the transmission of life.