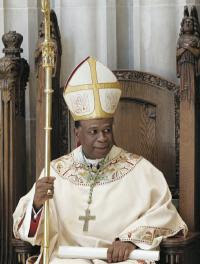 The bishop of an Illinois diocese says it will appeal a jury award of $5 million to a former altar boy sexually abused by one of its priests, concluding that the payout could drain the diocese's coffers and crimp outreach.

Calling the decision "the only recourse," Belleville Bishop Edward Braxton announced the decision to file a motion for a new trial in a letter he has asked priests to convey to the diocese's 100,000 Catholics in Illinois' 28 southernmost counties. The Associated Press obtained a copy of the letter Friday.

While mindful that the move "may seem to prolong the suffering of everyone whose lives are touched by the misdeeds of the past," Braxton wrote, complying with the judgment "would diminish diocesan resources and significantly limit the Church's ability to continue to serve our people, our parishes, our schools, all who have been victims of abuse" and others benefiting from the church's outreach.

"I believe that the course we are following is the wisest at this juncture," Braxton wrote.

Last month's award by a St. Clair County jury resulted from a 2002 lawsuit brought by James Wisniewski, who said the Rev. Raymond Kownacki sexually abused him dozens of times for five years in the 1970s at St. Theresa's Parish in Salem, Ill., beginning when he was 13.

Kownacki, Wisniewski testified, at times showed the then-altar boy a handgun, threatening to kill the child's parents if he ever told.

But in awarding Wisniewski $2.4 million in compensatory damages and $2.6 million in punitive damages on Aug. 27, jurors sided with Wisniewski's claims that diocese "fraudulently concealed" Kownacki's suspected molestations since the early 1970s and quietly shuffled him among parishes without warning each site's faithful.

Atlanta Archbishop Wilton Gregory, who as Belleville's bishop in 1995 removed Kownacki from the active ministry, testified that key documents about Kownacki were kept from him.

Gregory testified that if the claims were true that parish officials knew about Kownacki's violent past but still reassigned him, the diocese was culpable for Wisniewski's abuse.

Messages left Friday by The Associated Press at Wisniewski's house in Champaign, Ill., were not immediately returned. Now 47, Wisniewski said immediately after the verdict that "I do feel like a nightmare is over."

Kownacki, 73, has not been charged criminally, was not part of the lawsuit and has not spoken publicly about the case. He has an unlisted telephone number in Dupo, Ill., in suburban St. Louis, and could not be reached for comment Friday.

A spokesman for the diocese said the bishop's letter spoke for itself, and that there were no other separate statements or comments about the appeal planned.

The Survivors Network of those Abused by Priests, an advocacy group, has pressed that the verdict not be disturbed, urging Braxton in a letter after the verdict to "resist the temptation to delay justice, forestall healing, waste money, and further hurt victims and Catholics by dragging this horror out even longer."

But Braxton, in his letter this week to parishes, suggested that the move was necessary, citing his role as a "faithful steward of the resources of the diocese so that the pastoral services of the Catholic Church may continue without interruption for generations to come."

A $5 million dollar alterboy.. that's what I call a pay deal, he must have been the most professional bell ringer in christendom.

I'm sure the heatbroken old Judge prisiding over the figures won't have even earned that by the last time she bangs her gaval, I bet then she'll wish she was raised christian, sniff.