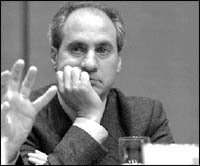 The Vatican has accepted Juan Pablo Cafiero's appointment as ambassador to the Holy See.

The announcement takes place after rejecting Alberto Iribarne, who had been proposed by the government of Argentina in the first place, for being divorced.

In this way, the diplomatic conflict between Cristina Fernández de Kirchner's government and the Holy See comes to an end.

Bilateral relationships had been frozen for ten months after Kirchner refused to appoint another ambassador immediately after the rejection.

After the announcement, the Argentine government highlighted the speed at which the new appointed ambassador was approved. Kirchner received the news while she was visiting the Neue Galerie in New York.

Cafiero, whose catholic practices and moderate profile may have accelerated his acceptance, expressed his content for having being accepted. Furthermore, he stressed the need to "restore" the relationship between the Holy See and Argentina, and he self-imposed this task.