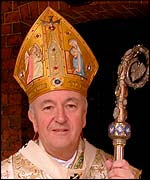 Catholic schools should "strongly oppose" any proposal for sex education that could sexualise children, a senior Church figure has said.

Speaking at the Diocesan Conference for Foundation Governors in Newcastle the Most Reverend Vincent Nichols, Archbishop of Birmingham said Catholic schools had a "fundamental right" to determine their sex education policies.

The Archbishop, who is also chairman of the Catholic Education Service, said the Church had made representations to the Government as part of a review of the provision of sex and relationship education in schools.

He said he welcomed the intention of the review to give greater emphasis to relationship education and the "emotional content of sexuality".

However, he said: "Catholic schools in England and Wales must strongly oppose any action or proposal that would sexualise children or be seen as in any way promoting sexual activity outside the context of married relationships."

He added: "In Catholic schools sex and relationship education must always be designed and delivered according to the teaching of the Church.

"It is this alone that gives critical stability to what Catholic schools do and to the coherence of the arguments they make".

Catholics and Sex! Does it ever occur to anyone that Jesus is recorded as having spoken a great deal more about money than about sex?

If we'd got the sharing and stewardship angles right, sex wouldn't be such a problem.