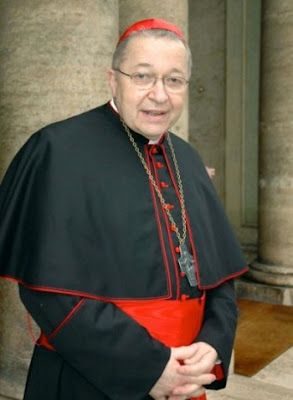 When the Archbishop of Paris, Cardinal André Vingt-Trois, met with reporters on the eve of Pope Benedict XVI's arrival in France on Friday, he ended up presiding over a heady mélange of funeral and lively TV talk show.

The French press, pointing to the continued steady decline in the number of practicing Catholics and the French state's commitment to godless reason, tried to prod Vingt-Trois into announcing the funeral for European Catholicism in his own backyard. But the Cardinal would have none of it, and the verbal sparks began to fly.

One reporter referred to Catholics as a "minority religion" in France, to which Vingt-Trois complimented the questioner's "slogan," but told him to check his math.

"I always thought minority is less than 50 percent," he said.

Next, someone cited French Cardinal Jean-Louis Tauran's statement that the Pope would come to Paris to "set the clock straight" on French Catholicism. Vingt-Trois cocked his head, and said such words don't correspond to "Benedict's style."

Finally, a questioner declared that the French Church was the Grande Malade (the Sick Lady) of worldwide Catholicism. An exasperated Vingt-Trois finally gave a bit of ground. "Our Church has difficulties, which are quite visible for everyone to see," he said. "But it is not the Sick Lady. Instead, there are signs that it is quite alive."

Alive, perhaps, but just hanging on. Though some 75 % of French citizens are baptized, regular mass attendance is edging below 10%. Even Church weddings have dropped, from 147,000 in 1990 to 89,000 in 2006. Indeed, the most notable new religious energy in the country is increasingly coming from a growing Muslim community.

Even those Catholics who do follow their faith have little hope that Benedict's four-day visit — which will include a mass in central Paris and a visit to the southwest pilgrimage town of Lourdes — can make a real difference. "It will create a buzz, but I don't think it will create a very deep feeling of religion," said Guillaume de Galard, 32, exiting mass on a recent Sunday in downtown Paris. "It will only exist for his time he's here."

It wasn't always this way. French Catholicism is known as the "eldest daughter" of the Church, for having pledged allegiance to Rome in the Second Century; and in the 14th century, the southern town of Avignon even served as the temporary home to the papacy. But France is also where modern anti-clericalism became ascendant with the 1789 Revolution, which eventually led to the thick black line separating church and state known as laïcité, and the arrival of humanist reason as the guiding principle in contemporary culture.

French President Nicolas Sarkozy has poked at this spiritual status quo, using a visit to Rome's Basilica of St. John Lateran to call for a "positive" conception of laïcité, which would also encourage public expressions of faith. Some critics, however, say that the twice-divorced Sarkozy sees the symbolic and historic identification with Christianity as a way to respond to the growing assertiveness of French Muslims.

More than history and symbols, Benedict is aiming at the future — and as he sees it, saving souls. He is keenly aware of the challenge in the heart of his native Europe, which has been drifting from its faith over the past century. Friday marks two years to the day from the most potent moment of his papacy, a provocative discourse at the University of Regensburg about how faith and reason can, and must, coexist. Though the Sep. 12, 2006 speech is best remembered for its citation of a Byzantine emperor's insults of the prophet Muhammed, which sparked Muslim outrage, the intended target of the Pope's words were the increasingly secularized Europeans.

The Pope's centerpiece speech in France is expected to come at the College des Bernardins in front of academics, cultural leaders, representatives of Islam, and European Union and United Nations officials. Some in the Vatican press corps have billed it Regensburg II, though few expect it will trigger any anger among Muslims.

While Benedict continues his efforts to stir Europeans with his ideas, there is also the work to be done on the ground. Georges Kouakou, 50, remembers the Western missionaries when he was growing up poor in his native Ivory Coast. Having emigrated to France, Kouakou, a computer engineer and father of three, regularly attends mass at Notre Dame des Victoires church in central Paris. The pastor to the mostly native French parishioners there happens to be from the Congo. "There's been an evolution," Kouakou says. "Europeans went to evangelize Africans; today it's the reverse, and Africans are now evangelizing. These are the seeds that God planted."