The Pope and Carla - a photographer’s dream 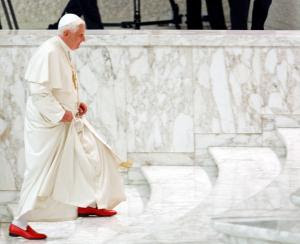 During a Vatican briefing this week on Pope Benedict’s trip to France, a television producer got up and asked the question that surely was foremost in the minds of many photographers and television crews struggling to hold back yawns as subjects such as France’s secular history were discussed:

Will Carla Bruni be at the airport to welcome the pope?

Vatican spokesman Rev. Federico Lombardi smiled. He said Carla Bruni’s husband — who happens to be Nicolas Sarkozy, the president of France – had made it known that he might be at the airport.

But he said he did not know if Bruni would be there.

Heads of state usually wait for popes at their palaces but sometimes, to show their added respect for the pontiff, they also go to the airport.

In Paris, government officials confirmed Sarkozy would break protocol and greet Benedict at Orly airport, something he is not required to do because this is an official visit rather than a more formal state visit.

They said they expected Carla to be there … but didn’t want to be quoted on that.

It seems wherever Sarkozy goes these days, the visual media is less interested in him than in his current wife, the fomer Carla

The Italian-born singer, song writer and former supermodel who has been the darling of the media since she entered Sarkozy’s life late last year.

Bruni, 40, married Sarkozy in February after a whirlwind three-month romance that started one month after Sarkozy, 53, divorced his second wife, Cecilia.

Carla, who has said she sees herself as being akin to the late U.S. first lady Jacqueline Kennedy Onassis, was not married to Sarkozy when he last saw the pope in Rome in December, so she did not — to the disappointment of the media — accompany him.

Sarkozy considers himself a “cultural Catholic” and attends mass only occasionally.

Under Church law he is not allowed to take communion since he has not received annulments from his previous marriages.

The pope’s trip to Paris and Lourdes begins on Friday and the media surely will have more weighty political and religious subjects to consider.