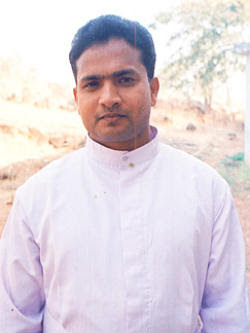 The whole Christian world watches, weeps and prays as anti-Christian violence continues in the Indian State of Orissa.

Fr. Thomas Pandippally, of the Congregation of Mary Immaculate, has watered the ground with his blood, martyred at the hands of what appear to be, from reliable reports, Hindu extremists.

The outpouring of love for this holy young priest continue to pour in from his brothers in the religious community with whom he shared his life and from those touched by his genuine witness to the love of Jesus Christ, especially for the poor.

This good witness in life has now been allowed to bear the final witness through his martyrs death to the claims of the Gospel he proclaimed in word and deed.

Testimonies of his influence are filling web sites erected to honor his memory on the World Wide Web. They are also fueling the resolve of the faithful in India to continue his witness by overcoming evil with good.

Fr. Thomas was a man of love, killed by hate, but now a witness to the triumph of God's love over that hate and over death itself.

The horrible pogrom of violence against Christians in Orissa has now led to Catholic educational institutions across the Indian nation deciding to close on August 29th.They are doing so in solidarity with the suffering. They are also calling on authorities in India to do all within their power to end the escalating violence against the followers of Jesus Christ in that land evangelized by the Apostle Thomas.

The Catholic Bishops' Conference of India (CBCI) held a Press conference in New Delhi and announced that September 7, 2008 has been set aside as a day of prayer and fasting for Christians in Orissa, in Eastern India. The President of the Bishops conference, His Eminence Cardinal Varkey Vithayathil of Ernakulam-Angamaly has called for all of the faithful to also organize and hold "peaceful rallies across the country to register strong protest against the repeated attacks" on Christians.

Reports from just the last two days indicate that at least five more deaths have occurred as armed men torch Christian churches, rectories, convents, Christian hospitals and other Christian institutions. The violence against Christians has been escalating in the eastern part of the Nation for sometime. Catholic Online has regularly reported on it.

However, the latest flare up seems to center around the tragic killing of Hindu leader, Swami Laxmanananda Saraswati, and five of his followers. Reports inside India indicate that radical Maoists revolutionaries have claimed responsibility for the killings. However, some Hindu extremists groups have falsely claimed that Christians were responsible and used these false allegations to spawn the latest cycle of violence.

We also publish this letter from Fr. Jose Panthaplamthottiyil, CMI, the Prior General of the community Father served, to both tell his story and keep his memory before the whole Christian world. It was delivered during the homily of Fr Thomas’ funeral Mass. “May His Soul and all the souls of the faithful departed rest in peace.”

Fr. Thomas Pandippally: the First Martyr of the CMI Congregation

"On this very sad occasion of the brutal murder of our beloved Fr. Thomas Pandippally CMI (37), I am writing this letter with a heavy heart after participating in his tear-filled funeral at our Provincial House in Ballampalli, Andhra Pradesh on Wednesday, August 20, 2008. With the gruesome death of Fr. Thomas we have lost a young, holy, dynamic, dedicated, talented and committed priest. We have indeed lost one of the promising jewels of our Congregation. However, in the loving providence of God we have also gained a true martyr in heaven.

After learning about the death of Fr. Thomas and visiting his dead body, Archbishop Marampudi Joji of Hyderabad wrote, “Fr. Thomas is a martyr, he sacrificed his life for the poor and the marginalized. He did not die in vain, because his body and his blood enrich the Church in India, particularly the Church in Andhra Pradesh.” During the funeral services of Fr. Thomas, Archbishop Abraham Viruthukulangara of Nagpur Archdiocese also praised him for courageously shedding his blood as a martyr.

While giving the funeral homily Fr. Mathew Kaniamparampil, the novice master of Fr. Thomas, recollected the dedication and the spirit of prayer seen in the life of Fr. Thomas which helped Fr. Thomas prepare for his martyrdom. Everybody who knew him including his classmates tell us how great a person Fr. Thomas was. They all praise him for the many talents he had as well as for the religious commitment he had shown even in most difficult circumstances.

It was on Saturday, August 16, 2008 that Fr. Thomas was brutally murdered while he was returning home on his motorbike after celebrating the Eucharist at Burigida, a sub-station of Yellareddy parish near Lingampet in the district of Nizamabad in Andhra Pradesh. Even though he was killed on Saturday night, his body was found only the following day on the road half way between Lingampet and Yellareddy. On his body there were 18 stab wounds. He sustained many more wounds on his face and hands during the struggle with his murderers which probably went on for about an hour. According to the postmortem report, his head was hit with sticks and boulders. One eye was pierced with a knife. Fr. Thomas literally shed his blood because of his commitment and dedication to the Gospel of Jesus Christ.

More than a thousand people including Mrs. Saramma Mathew, the mother of Fr. Thomas, many relatives and friends, and hundreds of priests and sisters attended the funeral. His Grace Most Reverend Abraham Viruthikulangara, Archbishop of Nagpur, presided over the concelebrated Mass while Prior General Fr. Jose Panthaplamthottiyil led the funeral services. Rev. Monsignor Solomon Thumma, Vicar General of the Archdiocese of Hyderabad, and many other Priests from the Archdiocese and almost all the priests from the dioceses of Chanda and Adilabad attended the funeral services. Provincial Fr. Alexander Thannippara, while thanking the participants of the funeral, praised Fr. Thomas for his courage and commitment in taking up the challenge to serve in a difficult place like Yellareddy.

Prior to the funeral services Archbishop Abraham Viruthukulangara, Fr. Jose Panthaplamthottiyil and Fr. Alexander Thannippara led a silent rally in protest against the violent death of Fr. Thomas. At the end of the rally Archbishop Abraham Viruthikulangara, Vicar Provincial Rev. Fr. Mathew Kulampally, Sreemathi Sreedevi, MLA, Anand Rao, Assistant Taluk Officer of Utnoor, and Fr. Prince Panengadan of the Diocese of Adilabad spoke denouncing the violence against the missionaries and asking the authorities to take action for bringing the culprits to justice.

Fr. Thomas (Kunjumon) was born in Cheenkallel as the sixth of the seven children of his parents in the district of Kottayam on 12-7-1971. He joined the CMI Congregation in 1987 and made his first profession on 19-3-1992. After taking a bachelor degree in science from Christ College, Bangalore, he studied Philosophy at Darsana Philosophate, Wardha and Theology at Jnana Deepa Vidyapeeth, Poona. After his ordination in 2002 he taught at Jeevandan School at Yellareddy for three years until he was assigned as the Rector of Aspirants at Nazareth Bhavanam in Bellampalli. He returned to Yellareddy in April 2007 to become the Director of Jeevadan Centre, Parish Priest and Correspondent of Jeevadan School where he shed his blood at the hands of enemies. It was while Fr. Thomas was preparing to go for higher studies abroad at the direction of the Provincial that he was asked by the same Provincial to take up the difficult assignment at Yellareddy. He then volunteered to go there even though he knew of the challenges ahead of him saying that he had joined the Congregation not to go for higher studies abroad but to serve the Church as needed.

After the terrible death of Fr. Thomas our missionaries as well as others in the surrounding area live in fear, and they all need our support especially in the form of prayers. Our heritage is that of St. Thomas the Apostle who had the courage to say, “let us also go and die with him” (John 11:16). Hence, nobody can or will stop our mission of love with violent crimes and we will continue to serve the poor courageously in the name of Christ, especially in regions where they need our help most. The history of the Church tells us that it was always through the blood of martyrs that the message of Jesus spread to the four corners of the earth. The shedding of the blood of Fr. Thomas in the name of Jesus will not be in vain. It will bring manifold blessings on the local Church as well as on every one of us.

To ensure the future safety of our missionaries it is imperative that the culprits of the violent crime against Fr. Thomas as well as against humanity should be brought to justice immediately. In this context we have requested the help of Mrs. Sonia Gandhi and higher authorities including the Prime Minister Manmohan Singh, Home Minister Shivraj Patil, Defence Minister AK Antony, Parliamentary Affairs Minister Vayalar Ravi, Andhra Pradesh Chief Minister Y. S. Rajashekhara Reddy and many others for taking immediate steps to bring the culprits to justice. As Yellareddy parish is in the Archdiocese of Hyderabad, Archbishop Most Rev. Marampudi Joji is trying his level best to bring comfort and consolation to our missionaries. He is also doing everything possible to put pressure on the state administration to identify and arrest the cruel culprits.

To pray for Fr. Thomas as well as to seek his intercession we will have a concelebrated Memorial Mass at 10.30 am on Saturday, August 30, 2008 at the Prior General’s House, Chavara Hills, Kakkanad. It will be followed by a memorial gathering presided over by his Beatitude Varkey Cardinal Vithayathil, Major Archbishop, our missionary bishops and other dignitaries. All the members of our Congregation as well as all others including priests, sisters and faithful are cordially invited to attend the Memorial Mass as well as the gathering. Let us all come together at the Generalate in large numbers to pay our respects to Fr. Thomas and to declare our solidarity with the missionaries who are facing the most difficult time in their lives.

I am happy to inform you that the CBCI and KCBC have declared, Sunday September 7, 2008 as prayer Day for missionaries in the context of the death of Fr Thomas Pandippally CMI.

It is my firm conviction that our missionary Church will flourish and missionaries will make a richer and more courageous contribution to the Church as a result of the martyrdom of our beloved Fr. Thomas.

With best wishes and love,

I thank God for answering my prayer trough the intercession of fr. Thomas pandippally.
I also pray that through such martyrdom, may all the missionaries gain more strength and courage to follow Jesus and spread the good news to the whole world.

May all the souls of the faithful departed rest in peace.