World's Cardinals meet with Pope to reflect on Curia reform 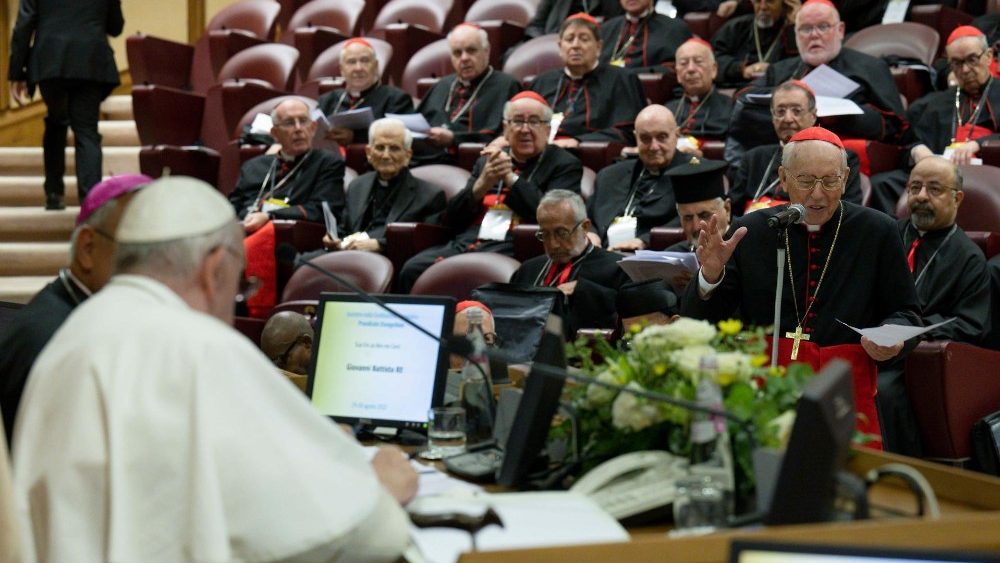 Just under 200 cardinals, out of the College's 226, are participating on Monday and Tuesday (29-30 August) in closed-door meetings convened by Pope Francis to reflect on the Apostolic Constitution Praedicate Evangelium, the document reflecting the Pope's reform of the Roman Curia.

The event will most likely mark the Pope's largest and most attended meeting with the College of Cardinals.

In almost ten years of his pontificate, never has such a meeting been held, and such wide attendance was seen only eight years ago when the Pope called the synod on the family (2014-15), inviting some 180 Bishops and Cardinals.

Having travelled to Rome from their countries over recent days to welcome the 20 new confreres created Cardinals in the 27 August Consistory, the Cardinals, together with Eastern Patriarchs and Superiors of the Secretariat of State, will participate in the meetings held at the new Synod New Hall during three morning and afternoon working sessions, with a break for lunch.

The two days of meeting will culminate on Tuesday, 30 August, at 5:30 p.m. with a papal Mass in St. Peter's Basilica with the new Cardinals, which Pope Francis was unable to celebrate on Sunday due to his pastoral visit to L'Aquila.

Participants say they received an agenda in recent weeks listing themes and questions on various aspects related to the Document. They are discussing them in language groups, and then will have moments of general discussion at the plenary sessions in the Hall.

During the Angelus of last 29 May, the same one when he announced the names of the new Cardinals, Pope Francis gave news he would convene the College of Cardinals for two days to explain the contents and changes of the Apostolic Constitution, promulgated on 19 March, which came almost as surprise given the near decade-long work involved.

"On Monday 29 and Tuesday 30 August a meeting will be held of all the Cardinals to reflect on the new Apostolic Constitution Praedicate evangelium, and on Saturday 27 August, I will hold a Consistory for the creation of new cardinals."

The document went into effect on 5 June, the Solemnity of Pentecost. The text features and formalizes many of the reforms already implemented by the Pope in recent years, studied and formulated by the Council of Cardinals that the Pope instituted at the start of his pontificate.

The Constitution also introduces various changes, beginning with the merging and renaming of several Dicasteries. Above all, however, Praedicate Evangelium - as the name itself suggests - gives a more missionary structure to the Curia, so that it is increasingly at the service of the local Churches and evangelization efforts.

One of the main characteristics of the Apostolic Constitution is its missionary dimension, a key to the reform and global direction for the Church of our times.

Although specifying the changes in the structure of Dicasteries and offices, Praedicate Evangelium 'broadens' in effect the boundaries of the Curia by creating a direct link with the Episcopal Conferences and the various Dioceses of the five continents.

A bridge between the Curia and Dioceses

"With the Constitution, there is now a space for listening and dialogue between the various churches and the Curia," newly appointed Cardinal Leonardo Steiner, Archbishop of Manaus (located in Brazil's Amazon), explained to Vatican News, when interviewed at the Holy See Press Office on Saturday just before the Consistory started.

"Now you no longer come to Rome to say what we have done, now you come to learn, but also the Curia knows how to learn in a different way. There is a better sense of who is at the service of the Holy Father, at the service of the bishops, and this is a hope to be a more fraternal Church where we listen, where we experience and appreciate cultural diversity," Steiner said.

Voices of the new cardinals

Newly-created Cardinal Arthur Roche, Prefect of the Dicastery for Divine Worship, underscores that there are many issues to reflect upon: collaboration between the Curia and episcopates, the presence of the laity in roles of responsibility, "missionary outreach" and "conversion of the Church."

Particularly the latter two "are very important elements," the English cardinal said. "Praedicate Evangelium is not just something for the reform of the Curia, it is also regards the relationship between all the Bishops' Conferences and the Holy See. Mission and conversion involve everyone in an almost synodal process. We could say we are a Church on pilgrimage."

The meetings over these two days will also offer a way for the members of the College of Cardinals to deepen their knowledge and understanding of one another.

Some come from the peripheries of the world and distant realities. A universal vision has always distinguished Pope Francis' choices for a College of Cardinals as seen with the representation of countries that never in their history had a Cardinal: from Tonga to Brunei, from Mongolia to Haiti, from Bangladesh to Laos to Lesotho.

The College is now composed of members who are very diverse both in terms of cultural background, pastoral sensitivity, and geographical locations that make it difficult for them to attend meetings in Rome on a regular basis or simply participate.

The meeting with the Pope these days offers an opportunity for dialogue and getting to know each other better, as pointed out by the Archbishop Emeritus of Cartagena, Colombian Cardinal Jorge Enrique Jiménez Carvajal: "The Consistory and the meeting with the Pope helps us to get to know one another, to feel more aware and prepare for the future."