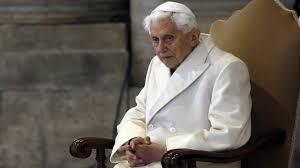 After a website dedicated to Benedict XVI received thousands of congratulations in 24 languages on the occasion of his 95th birthday this year, the organizers moved to make www.BenedictusXVI.com available in English, broaden its scope — and take it international.

Launched on Aug. 28, the new international version in English aims to provide a "beacon in the stormy seas" of rampant secularization, the Tagespost Foundation announced.

Currently, the site offers a newsletter of inspirational quotes and excerpts from key texts by the noted theologian, biographical notes, background information, and a statement on the Munich report into clerical sexual abuse.

"The goal of the BenedictusXVI.com project is to build an attractive digital knowledge portal that will become the authorized international collection point on the life, thought and work of Joseph Ratzinger/Benedict XVI.," in "cooperation with experts in Germany and abroad," the organizers told CNA in a written statement.

"The pope emeritus himself has given his consent to this project."

The portal's development is a joint project between the Tagespost Foundation for Catholic Journalism and the Institute Pope Benedict XVI.

Benedict XVI celebrated his 95th birthday on Apr. 16, Holy Saturday. He was born Joseph Alois Ratzinger in 1927 in Marktl am Inn, a small Bavarian town not far from Austria, also on a Holy Saturday.

Looking back to his birth in his memoir, published before his election as pope, he wrote: "The fact that the birthday was the last day of Holy Week and the eve of Easter was always noted in the family history, because it was connected with the fact that I was baptized right on the morning of my birthday with the water that had just been consecrated in the 'Easter Vigil' celebrated at that time in the morning. To be the first baptized with the new water was considered a significant providential event."

He continued: "The fact that my life was thus immersed in the Paschal Mystery from the beginning in this way has always filled me with gratitude, for this could only be a sign of blessing."

"Admittedly — it had not been Easter Sunday, but only Holy Saturday. But the longer I think about it, the more it seems to me to be in keeping with the essence of our human life, which is still waiting for Easter, not yet in full light, but nevertheless confidently moving toward it."