Consistory: 20 new Cardinals and 2 Saints for the universal Church 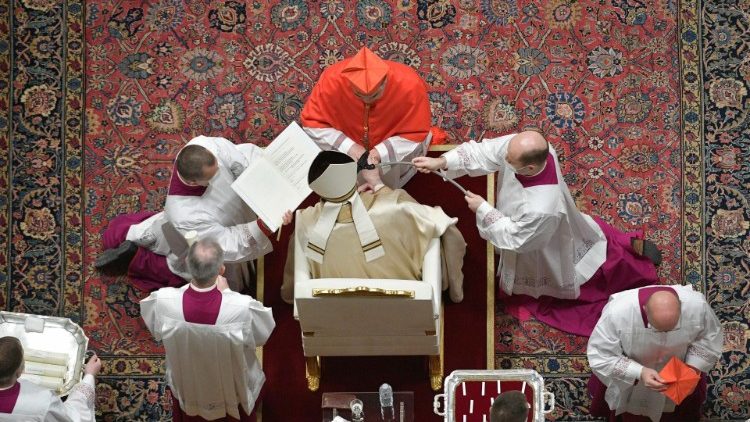 Existing and new members of the College of Cardinals from every corner of the globe gather in Rome on Saturday, 27 August, for Pope Francis' eighth Consistory, where he creates 20 new cardinals, 16 of whom are under the age of 80, thus electors in a future Conclave, and four non-electors, over the age of 80.

The celebration marks a universal Consistory, with Church leaders from the five continents.

It will also be a "mixed" Consistory with the creation of the 20 new cardinals, who vote shortly afterwards on the causes for canonization of two Blesseds. The Consistory takes place at the end of August, which is usually a quiet period, and includes other celebrations over the next two days and next week with the reflection and in-depth study meeting on Praedicate Evangelium, the Apostolic Constitution reforming the Roman Curia.

Rite of creation of new Cardinals

The rite during which Pope Francis will place the red biretta on the new Cardinals, give them their ring, and assign them their title and rank takes place at 4 p.m. in St. Peter's Basilica.

It begins with the singing of "Tu es Petrus" and words of thanksgiving to the Holy Father by the Cardinal first on the list. The Pope pronounces the formula of creation of new cardinals, who promises their allegiance and obedience to the Pope and his successors "even unto the outpouring of blood."

One by one they approach the seat of the Pope to receive on their knees the symbols of the cardinalate: red skullcap, biretta, ring, the bull assigning the title and rank. Each receives an embrace of peace from Pope Francis, a gesture repeated immediately afterward by the Cardinal Dean, the senior Cardinal Priest and senior Cardinal Deacon, representing the entire College of Cardinals.

Vote on the canonizations

Saturday's rite of creation is to be followed by the Ordinary Public Consistory for the vote on the canonization of Blesseds Giovanni Battista Scalabrini, Bishop of Piacenza, founder of the Congregation of the Missionaries of St. Charles and the Congregation of the Missionary Sisters of St. Charles Borromeo, better known as the Scalabrinians, and Artemide Zatti, a professed Salesian layman.

Cardinal Marcello Semeraro, Prefect of the Dicastery for the Causes of Saints, reads the Peroratio and briefly presents the biographies of the Blesseds. The Pope then gives the outcome of the votes and names the day for the canonizations.

At the end, he leaves the Basilica through the Door of Prayer with the new Cardinals, and likely proceeds to the Mater Ecclesiae Monastery in the Vatican Gardens to visit and greet Pope Emeritus Benedict XVI, a gesture he has made every Consistory so far.

From 6 to 8 p.m., the new Cardinals then greet the faithful of Rome and those visiting from their home countries for the customary post-Consistory congratulatory visits. These visits take place in the Paul VI Hall and the Apostolic Palace.

Then they gather together on the following Monday and Tuesday, 29 and 30 August, for two days of in-depth study of Praedicate Evangelium, and finally, on Tuesday at 5:30 p.m., they celebrate Mass together with Pope Francis in St. Peter's Basilica.

Universality and the peripheries

The names of the new Cardinals were announced by the Pope from the window of the Apostolic Palace during the Angelus on 29 May, along with a request to pray for them "so that, in confirming their fidelity to Christ, they may help me in my ministry as Bishop of Rome for the good of all God's holy faithful people."

The list of names confirmed the twofold criterion seen in the previous seven consistories of Pope Francis. They are internationality, with a special focus on the global south, and attention to the peripheries, that is, the border territories that historically have never had a Cardinal, rather than places traditionally considered "Cardinal-sees."

From all parts of the world

Beyond the first three names of men serving in the Roman Curia, especially given their long tenures, namely the prefects of the Dicasteries of Divine Worship and the Clergy, along with the president of the Governorate, the list of new Cardinals includes those from Europe, six new Cardinals from Asia, two from Africa, one from North America and four from Central and Latin America.

Four new countries are now represented: Mongolia, Paraguay, Singapore and East Timor. In addition, there are seven religious, including five electors and two non-electors. Three new religious members will enter the College of Cardinals: the Congregation of Jesus & Mary (Eudists), the Consolata Missions Institute and the Legionaries of Christ. The most numerous in the College of Cardinals are the Salesians, numbering ten.

At the announcement during the Angelus last May, there were 21 names proclaimed by the Pope. The list included some over the age of 80, those who will not be able to vote in a future Conclave but are given the red hat as a sign of gratitude for their service to the Church.

Among them was Bishop emeritus of Ghent, Belgium, Luc Van Looy. Less than 20 days after the Pope's announcement, the Bishop emeritus asked to be relieved of the cardinalate because of a controversy caused by his appointment. Van Looy has been accused by associations of victims of clerical sexual abuse for failing to act decisively in the past in the face of such crimes. In order to prevent survivors from suffering new injuries, Bishop emeritus Van Looy himself submitted this request to the Pope, who granted it in June.

Names of the new Cardinals

Those over the age of 80 whom Pope Francis is elevating to the cardinalate are: Archbishop emeritus Jorge Enrique Jiménez Carvajal of Cartagena (Colombia); Archbishop emeritus Arrigo Miglio of Cagliari, Italy; Fr. Gianfranco Ghirlanda S.J., canonist and former rector of the Pontifical Gregorian University; and Msgr. Fortunato Frezza, canon of St. Peter's Basilica.