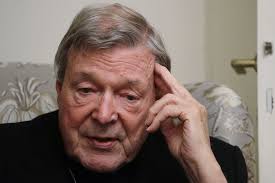 An Australian court on Wednesday ruled that a man can sue the Catholic Archdiocese of Melbourne and Cardinal George Pell for nervous shock over the alleged sexual abuse of his late son.

The man is the father of a former choirboy, who prosecutors alleged had been abused by Pell. His son died from an accidental drug overdose in 2014, having never made a complaint against Pell.

The father is seeking compensation in a civil case against the Catholic Archdiocese of Melbourne and the 81-year-old Pell, who served as archbishop of Melbourne from 1996 to 2001.

According to court documents, the father claims his son was abused by Pell and died from a heroin overdose “caused by the psychological impact of the abuse.” In turn, he says, he suffered nervous shock for which he is making a claim against the archdiocese and the cardinal.

Australia’s High Court unanimously overturned Pell’s conviction for alleged sexual abuse on April 7, 2020. The cardinal, who has always maintained his innocence, was released after more than 13 months of imprisonment and returned to Rome, where he had served as the Vatican’s economy czar.

The Supreme Court of Victoria ruled on Aug. 24 that the man can sue over the psychological harm he says he suffered over the death of his son.

According to a report by the Age, this decision could pave the way for other families to sue the Church.

Justice Michael McDonald ordered the archdiocese to pay the plaintiff’s legal costs, but not Pell, who he said played “no active role” in the hearing, the ABC reported.

A spokesperson for the Archdiocese of Melbourne told the Age: “We acknowledge the judgment handed down by his honor ... and will be working through what that means in coming days.”

The case will return to court at a later date.