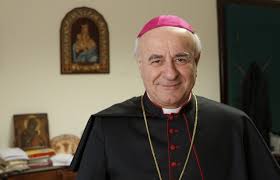 Responding to criticism about a recent TV interview in which he called legalized abortion a “pillar” of the Italian system, a top Vatican official for human life insisted Monday that he was referring to political realities, not moral doctrine, and reiterated his strong opposition to abortion.

A spokesman for Archbishop Vincenzo Paglia, head of the Vatican’s Pontifical Academy for Life, insisted that in the interview with an Italian television outlet, the veteran prelate did not offer “a judgment on the [moral] value of the law, but rather an observation that it’s practically impossible to abolish it since by now it’s a structural element of [Italian] legislation.”

The measure that legalized abortion in Italy, known as legge 194, dates to 1978, and was upheld by a large majority in a poplar referendum in 1981. Since then, a motto of Italian politics has been la legge 194 non si tocca, roughly meaning it’s not to be touched.

For example, Italy has national elections scheduled for next month, but neither the leading right-wing nor left-wing parties have proposed revisiting the abortion law.

Nevertheless, Paglia has come under fire repeatedly since taking the helm at the Academy for Life in 2016, most recently for the publication of a set of essays from a conference last year in which some theologians appeared to suggest that the ban on birth control could be set aside in particular cases.

Given that background, Paglia’s latest comments on the abortion law triggered criticism in the conservative Italian press, some of which his spokesman described as “specious and offensive.”

Suggesting that the 77-year-old Paglia is weak on abortion, the spokesman said, ignores the fact that in the same interview he called for a more aggressive application of provisions of the abortion law that call for support for mothers.

“That the law can be, indeed must be, improved in the direction of a fuller defense of the unborn child is more than to be hoped, with attention to avoiding the risk of making the situation worse, which unfortunately has happened in some cases,” the spokesman said.

The statement insisted that criticism of Paglia’s interview overlooks his “defense and promotion of life in every age, from conception to death, and in every situation (how many times is it humiliated with children, women, prisoners, those condemned to death, immigrants and the elderly?)”

In any event, the spokesman said, to question Paglia’s opposition to abortion overlooks the fact that in late May he took part in a ceremony organized by Italy’s largest pro-life movement in which he blessed a statue of Mary with Jesus in her womb.