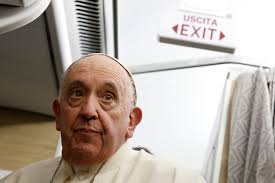 Pope Francis could have his influence curtailed under proposed reforms to what a retired pope could look like.

Pope Francis has, of course, done little to downplay rumours of a looming departure, recently telling reporters he can no longer travel like he once did, and one day may have to quit.

Pope Francis repeated a phrase – “the door is open” – adding that there was nothing wrong with a pope stepping down.

Meanwhile, through his resignation, Benedict XVI not only set a precedent for the resignation of later pontiffs but an example of what a retired pope would look like, even if the role needs better definition.

Whether intentionally or not, Benedict has also been a lodestar for traditionalists.

At the start of his own papacy, the current Pope said he would like to see the resignation of pontiffs become normalised, and later said he had a feeling his pontificate would be brief, describing his predecessor’s decision to step down as “courageous”.

As quoted in the Guardian, papal biographer Austen Ivereigh argues: “From very soon after he was elected, Francis said that Pope Benedict’s resignation had changed the institution of the papacy and that all popes from now on would need to reflect on whether they should stand down for reasons of frailty.”

Ivereigh added: “Modern popes do a lot of gruelling and demanding travel. The extrovert nature of the contemporary papacy means endless meetings and crowd gatherings, and a certain level of fitness is required. Plus, modern medicine means you can carry on living in a frail state in a way that you couldn’t before.”

For traditionalists, Benedict gets two ticks: one, for having created the example for Francis to follow in terms of resigning, and two, for having acted a lodestar for conservatives during Francis’ pontificate, inspiring many opposed to the Holy Father’s more progressive words and actions.

Not that Benedict has not had his critics, having been accused of undermining Catholic unity. Some canon lawyers have questioned the decision to retain his papal name as well as continue wearing a white cassock.

Yet, his retirement did not fundamentally undermine Church unity, suggesting that if Pope Francis were to retire it too would not be fatal for the unity of the Church.

Still, just as Benedict been a lodestar for conservatives, Pope Francis could fulfil the same role for liberals.

This may be especially so given the make-up of the College of Cardinals, very much in Francis’s image, meaning a continuity candidate could certainly be selecting to succeed the Pope.

Like Benedict, it is also likely Francis may allow his views to be known post-office.

Meanwhile, news that experts are drafting laws on the status of a future retired pope may send rumours of Francis’s impending resignation into overdrive. Canonist, Geraldina Boni, told Catholic News Service: “It is no longer inconceivable for a pope to resign, with this door having been ‘opened’, as Francis himself has said several times.”

Proposals can be found here.

Many suggestions mirror approaches taken by Benedict, such as “the name of the one who resigned can be the same that he used during his office”, he “may use the white cassock that Roman pontiffs usually wear”, and he may reside in Vatican City.

However, instead of “pope emeritus”, the proposal suggests “bishop emeritus of Rome” while using “the ring that every bishop must wear.”

A more regulated role could impede the influence of a retired Francis.

Not having the title of “pope”, for instance, would perhaps curtail his impact after office.

That said, would Pope Francis really be a silent ex-pontiff?

Although he has suggested otherwise, nothing it seems may prevent him from remaining in Vatican City, and retaining some of the trappings of head of the Church.

The year 2013 was very much a watershed, even if the role of a future ex-pope will need to be better defined.

But greater delineation as described could clip the wings of Francis-in-retirement, restraining liberal impulses within the Church if and when he quits.

That said, Francis could remain in the Vatican, having said he will not return to Argentina, meaning the current Pope will not likely be an invisible ex-figurehead if and when he exits.

Nonetheless, if he does resign, he may not have the influence in retirement which he perhaps hoped for.

Traditionalists may then breathe a sigh of relief at the thought of a neutralised Francis-in-retirement, unable to act as the inspiration for liberals which many fear.

Looking at changes in Germany and Ireland, fears of a lodestar Francis are growing.

That said, it is widely accepted that the role of emeritus pope needs greater clarity.

For conservatives, these changes may have ben suggested at just the right time.