‘Two popes too many’: Is the world ready for three living popes? 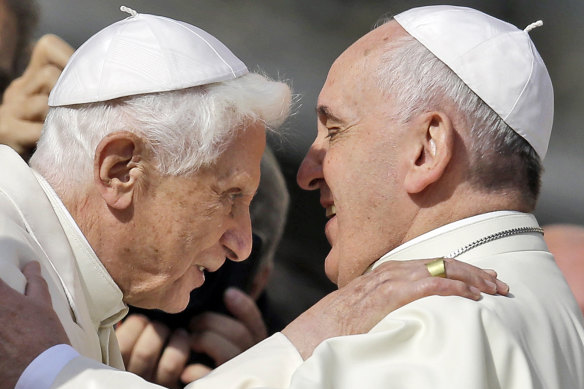 When, in 1294, Celestine V stood aside as pope after five miserable months in the job, he vowed to the church he would return to his previous life as a hermit and head for a cave in the Abruzzi mountains.

But his successor, Boniface VIII, was deeply concerned about the idea of two living popes and feared that followers of the Catholic faith would still rally round Celestine, installing him as an antipope, despite his stint having widely been viewed as a disaster.

For seven centuries since then the lessons of the hermit pope have served as a reminder to those who followed that the papacy was a job for life. At least until 2013, when Pope Benedict XVI’s abrupt resignation shocked millions around the world.

Catholics have now become somewhat used to life with two popes – or one pope and one pope emeritus, to be correct. The unique events have spawned a hit stage play and Oscar-nominated film on Netflix, starring Sir Anthony Hopkins.

But now the Catholic world is being forced to entertain the previously inconceivable – life with a third living pope – as speculation builds that Pope Francis, who replaced Benedict almost a decade ago, could leave within months as he battles health issues.

Later this week Francis plans to visit the central Italian city of L’Aquila and its basilica, which has fuelled speculation of a possible announcement of his resignation. L’Aquila’s basilica is the burial place of St Celestine. It was also where – on top of Celestine’s glass casket – Benedict XVI left the woollen pallium he had worn during his installation Mass, a gesture many believed had been a sign of his intended resignation, which came four years later.

Paul Collins, a historian, broadcaster, writer and Catholic priest for 33 years until he fell out with the Vatican, says Pope Francis might resign, but not before the now 95-year-old Benedict dies.

“I mean, three popes is two popes too many. It would be unique situation in church history, and I am not sure if it is a situation that the church needs,” he says.

“I don’t think he will do anything like resigning, certainly until Benedict dies.”

Francis last month added to months of constant rumours about his future when he acknowledged that his health may force him to retire early, after struggling with a week-long Canadian pilgrimage because of strained knee ligaments.

“I think at my age and with these limitations, I have to save [my energy] to be able to serve the church, or ... think about the possibility of stepping aside,” Francis told journalists on the flight back to Rome.

“It’s not strange. It’s not a catastrophe. You can change the pope.

“The door [to retiring] is open – it is a normal option.”

Several Vatican news outlets have published unsubstantiated rumours that Francis, who in July 2021 underwent surgery to have a section of his colon removed, is suffering from cancer. This has not been confirmed by the Vatican.

Francis has ruled out surgery on his knee, saying it would not necessarily help. He has acknowledged “there are still traces” from the effects of having undergone more than six hours of anaesthesia to remove 33 centimetres of his large intestine.

“I think he suffers a lot of pain from sciatica, and as someone who suffers from arthritis of the knee, I can sympathise with him,” Collins says. “But there are certainly no signs of any mental decline, certainly nothing like what we saw with John Paul II.”

“I think he is quite determined to try to carry through the policies that he’s begun. Specifically, the policies surrounding this dreadful word synodality – in other words to make the Catholic Church more synodal, more consultative, in its structure. To him that’s very important.”

Francis’ drive to give the bishops and the laity a greater role in the governance of the universal church has created much opposition. Collins, a progressive Catholic, says Francis has also tried to return the church to what he believes it used to be, a place of pastoral care.

“That is, rather than proclaiming more of abstracts from the housetops, we should be down in the ruck, caring for the people, caring for women who face abortion, caring for dying people who are in terrible pain, in other words ... the pastoral role of the church,” he says.

“Francis has certainly shifted the spiritual approach of the church away from that kind of rigid ideology of John Paul II and Benedict XVI that, you know, ‘either you do this and believe this or you’re not really a Catholic’.”

This has led to concerns from some more conservative Catholics that Francis has already begun planning his successor. That theory gained momentum recently when he made the unconventional decision to host a consistory on August 27 to create 20 new cardinals.

Sixteen of the new cardinals are not yet 80 years old, so in the event of a conclave – an assembly of cardinals for the election of a pope – they will be able to vote for Francis’ successor. Voting at conclaves was limited to cardinals younger than 80 as a way of building in term limits and preventing the elderly from having to travel to Rome.

“It’s very odd to have a consistory in August. There’s no reason that he needs to call this [event] three months in advance and then go to L’Aquila in the middle of it,” Robert Mickens, the editor of La Croix, a Catholic daily newspaper, said recently. He added it was a “very good possibility” the Pope could resign.

The title “pope emeritus” has been a point of fierce contention for some within the church during the past decade, including Cardinal-designate Gianfranco Ghirlanda, a Jesuit theologian and canon lawyer who will be one of four new cardinals aged 80 or over Francis will elevate later this week as a symbolic honour to thank him for his service to the church.

At a two-day congress on the historical and canonical aspects of a papal resignation in L’Aquila last December, Ghirlanda said: “Having two people with the title of ‘pope’, even if one added ‘emeritus’, it cannot be said that this might not generate confusion in public opinion.”

The idea of more than one pope at one time “dangerously mixes up the precise meaning of the Petrine ministry, which is that of being a sign of unity of the church,” he said in his talk.

But Francesco Mores, a research fellow at the University of Milan and an expert in the history of Christianity and of churches, said there was a biological factor to consider.

“There used to be a whirlwind change in the bishops of the Church of Rome, the average life expectancy was much shorter and people died much easier than they do now. There was no need for popes to resign,” he told Newsweek recently.

Mores said that another key reason popes had not often resigned in history was because of their symbolic role as vicars of Jesus Christ on Earth. While bishops retire at the age of 75, popes – for this reason – have never been set a retiring age.

“The pope is chosen in some way by God, as Jesus Christ’s vicar. It’s complicated for him to resign this way,” he said.

While Francis has said it will be God’s decision whether he continues in the job, he has also criticised “traditionalists” in the church, again hinting he could follow Benedict’s exit from the Vatican.