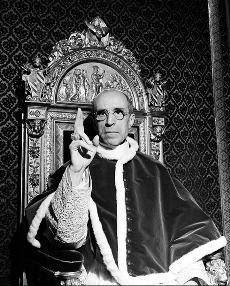 The Vatican, fighting a public backlash from some Jewish groups, says the pope's decision to move controversial Pope Pius XII closer to sainthood is not an act of hostility toward Jews.

Saturday, Benedict signed a decree on Pius' heroic virtues, paving the way for him to be beatified once a miracle attributed to his intercession is confirmed.

Some Jewish groups, as well as some historians, argue that Pius, who was pope from 1939-1958, should have done more to prevent the deaths of 6 million Jews at the hands of the Nazis and their collaborators.

The Vatican said in a statement that the German-born Benedict feels great respect for and friendship toward Jews — and hopes to reinforce that sentiment during his first visit to Rome's synagogue next month.

It insists that Pius used quiet diplomacy to try to save Jews during World War II and that speaking out more forcefully would have resulted in more deaths.

Some Jewish groups want Benedict to suspend his cause on Pius' behalf until the Vatican archives on his pontificate are opened to outside scholars.