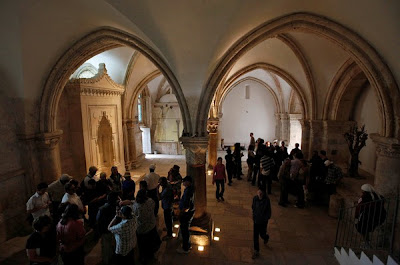 The government of Israel seems to be embracing the Christmas spirit.

This week it is organizing carols and tree giveaways in Jerusalem, bus service to Bethlehem and even a fireworks show in Nazareth with an apparent eye on burnishing the nation's reputation for religious diversity.

But Israel won't be giving the Christmas gift near the top of the Vatican's wish list this year: possession of a Mt. Zion holy site where Jesus is believed to have gathered his disciples for the Last Supper.

The Roman Catholic Church has been fighting for more than 450 years to win back control of the Crusader-era sanctuary, also known as the Holy Cenacle, which was seized from Franciscan monks around 1551 during the Ottoman Empire.

Vatican officials had hoped to made a deal with Israel this year, but the latest round of negotiations ended this month without an agreement, leading some to say that the impasse is souring diplomatic relations between the two sides.

Danny Ayalon, Israel's deputy foreign minister, who traveled to Rome this month, said he was hopeful that a compromise could still be reached. But though Israel might consider giving the Vatican a greater role in operating the site, he said that turning over sovereignty was unlikely.

"It is part and parcel of Jerusalem, and nobody can expect us to split sovereignty or possession," Ayalon said, adding that high-level talks weren't likely to resume until mid-2010.

Franciscan officials in Jerusalem, who serve as custodian for several Christian holy sites in Israel, expressed hope that the location would one day return to their hands.

"It's one of the most important holy places," said Father Athanasius Macora, secretary of a Franciscan commission monitoring holy sites. He noted that the Holy Cenacle is also revered as the site where, according to the Christian faith, the Holy Spirit appeared before the disciples on the first Pentecost .

Franciscans "have a special attachment," Macora said. "It was our mother house and headquarters. We still have the deed to the property."

Macora, a Texas native, said Franciscan control of the Last Supper room would open the site to regular Christian prayer services, Masses and other ceremonies, which have been prohibited since the Ottoman era.

"If we get the place back, we would allow everyone to have access to it," he said.

But as is true of many holy sites in this deeply religious city, the Holy Cenacle, on a hill just outside the Old City walls, is the object of conflicting historical claims. It sits atop the Tomb of David, where some Jews believe their ancient king was buried. And during the Ottoman period, the Holy Cenacle was used as a mosque.

Evidence of the competing claims is apparent in the stone-walled compound, where crosses are mixed with stars of David. In the Last Supper Room is a carved stone niche pointing toward Mecca that once was used by Muslims during prayer.

Some experts worry that reopening the debate over control will inflame religious tensions and lead to more clashes over holy sites in a city that is home to hundreds.

"It's a typically complex Jerusalem problem," said Daniel Rossing, head of the Jerusalem Center for Jewish-Christian Relations and a former Israeli government advisor on Christian communities. "Once you start to turn back the clock, you open a Pandora's Box and throw things into chaos. Maintaining the status quo is usually the general policy."

Issues of sovereignty are particularly sensitive in Israel, where border and land disputes lie at the heart of the Israeli-Palestinian conflict. Last year, when Israel returned a small parcel of land once owned by the Russian czar to the Russian government, the gesture of goodwill sparked condemnation among Israelis who feared that the deal would lead to other "territorial demands."

The structure on the Holy Cenacle site is believed to have been built in the 12th and 13th centuries, although parts of the foundation are said to date to the 2nd century. Israel seized Mt. Zion during the 1948 Arab-Israeli war in the wake of British rule.

Efforts by the Vatican to regain control began while the British were in charge, but faltered. In 2005, then-Israeli President Moshe Katsav reportedly drafted a proposal to swap control of the Holy Cenacle for a synagogue-turned-church in the Spanish city of Toledo, but that plan fizzled.

Some say the lack of progress is a reflection of the often-strained relationship between Judaism and Catholicism, and between Israel and the Vatican, which did not formally recognize the Jewish state until 1993.

"If things were friendly, such matters would be solved in months, not years," said Sergio Itzhak Minerbi, a longtime Vatican watcher and former Hebrew University professor.

Many Jews blame the Vatican for fueling centuries of anti-Semitism. Old wounds were recently reopened when the Vatican moved forward with seeking sainthood for Pope Pius XII, whom many Jews fault for failing to speak out against the Holocaust.

For its part, the Vatican is often critical of Israel's treatment of the approximately 150,000 Christians living in Israel, the West Bank and Gaza Strip.

Despite the high-profile Christmas tree giveaways each year, the mostly Arab Christians complain of inequality in matters of employment, housing and social services.

Christians also have complained in recent years about Israel's renovations to Christian holy sites and efforts to seek taxes from Christian-run schools and monasteries.

Minerbi said he suspects that the primary bone of contention is the Vatican's request for tax-exemption for most religious sites. Once the financial issue is resolved, he said, the conflict over the Last Supper site will be settled.

In the meantime, he has offered a novel compromise: Put the site back under control of Muslims, who ran it for four centuries before the British took control after World War I.

The idea has provided Israel and the Vatican with something they can finally agree on. Both are vehemently opposed.