Security must be tighter, cardinal says 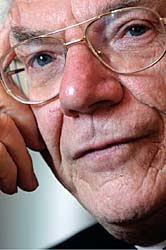 The Christmas Eve attack on Pope Benedict XVI highlighted the headache of providing watertight security for the leader of the Roman Catholic Church without cutting him off completely from his flock.

Italian-Swiss national Susanna Maiolo, 25, stunned pilgrims during the Christmas Eve mass at St. Peter's Basilica by leaping over a security barricade and dragging Pope Benedict, 82, to the floor.

The pontiff quickly recovered and went on to celebrate Mass.

But French Cardinal Paul Poupard, who was with Benedict at the time of the assault, said afterwards the incident was "definitely a threat" to the Pope and that security should have been tighter.

"With hindsight, you would say greater vigilance was needed, so those in charge of security should not let their guard drop even for a second," the cardinal said on RTL radio, though he acknowledged the difficulty of the task.

"You can go over everything with a fine-tooth comb, [but] if someone really wants to do harm, they will do it -- you can never have a 100% guarantee of stopping them," he added.

Vatican spokesman Federico Lombardi played down Thursday's incident, praising Pope Benedict's "great self-control and control of the situation," he said. "It was an assault, but it wasn't dangerous because she wasn't armed."

Mr. Lombardi said the only way to protect the Pope from all risk would be to create a wall between him and the faithful, but that this was "unthinkable."

Pope Benedict has faced down attempted assaults and terrorist threats in the past -- most recently last Christmas when the same woman, Ms. Maiolo, tried to grab him before being restrained by bodyguards.

In June 2007, a 27-year-old German man jumped the security barrier and boarded the popemobile as it passed before a crowd in St. Peter's Square.

The al-Qaeda extremist network has repeatedly threatened to kill Pope Benedict, accusing him of being anti-Islamic.

Such threats -- against the pontiff and the Catholic Church -- have seen airport-style security introduced in Vatican City in recent years.

The midnight Christmas Mass is already one of the few occasions when members of the public can get close to the Pope.

"Having full security around the head of the Catholic Church could limit his pastoral activity," he said.

The Vatican rarely releases details on the Pope's security arrangements, but he is understood to have 350 officials responsible for protecting him.

They include 110 members of the Pontifical Swiss Guard, 140 Italian police officers and 100 officers from the Vatican's own police service.

St. Peter's Square is now encircled by metal barriers, and pilgrims must pass through security checks and metal detectors before entering the basilica.

To whom it may concern:
As a person who studies history I have found that people love to blame the Catholic Church when things go wrong. I have to ask myself if in fact this woman were “mentally unstable” or if she only wanted to hug our Holiness … Throughout our history there have been many assonation attempts on our popes and cardinals. Here in Mississippi the local Priest in Port Gibson who is 88 years old was robbed at gun point. It seems that the general population thinks that “Catholics are rolling in the dough” sort of speak. I have to ask myself, why people think that the Church has money? When people look at the Vatican, they tend to forget that is a place of Holiness and the as we say in the south, the Vatican is “as old as the hills”. The reason the Vatican has so many artifacts is because it is so old and most of those artifacts are “relics” ,blessed by God. I think the majority of those in the Protestant faith see our ceremony and see our churches and think they we are sitting at the top of some “mountain of money”. I find they tend to forget that we have a lot of charity work that we do.
If the church stopped all the charity work it does, which would be going against dogma in my personal opinion, would cause more harm than good. It is sad when our Priests cannot walk the streets without being robbed. This 88 year old man of God was not bothering anyone and I will be praying for this person daily. I cannot tell you how many people tell me that “all Catholics are hoarding money” this is simply not the case. The biggest example I can think of when concerning the people thinking the church was rich, was the French Revaluation. When they got through chopping everyone heads off, the next thing was the church. I do not think this would ever happen but if people rebelled in the south, the next thing to go would be the Catholic Church. I challenge anyone to look at the validity of my argument. When there is uprising, generally the next thing to go is the church. Another example is King Henry the 8th and all his wives. I hate to open old wounds but who was it that broke from the Catholic Church and stole from us. If anything I want people to know that our churches are suffering because the people think we do not care about them.
The pope was saying that he cared about the people because they bring him amongst the people all the time. If people continue to blame the church I fear that more and more people are going to be targeting the pope. I read many blogs and people balme the pope all the time. We generally tend to feel better if we blame it on religion. I try to help out where ever I can. I am a Catechumen and I go to church with some Protestants and this is why I say what I say. I hear the “talk” in the grocery store. All these statements hurt me because I feel that people are not properly educated on the church itself. If people were more educated on the church, could we stop a lot of what is happening? I am just saying. I could be wrong!