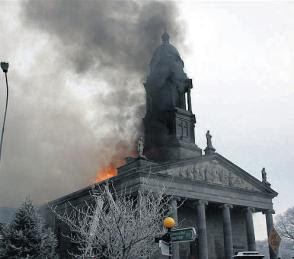 A HISTORIC cathedral burned to the ground on Christmas morning -- just hours after a bishop talked about an arson attack on a convent in 1642.

St Mel's Cathedral in Longford and its contents -- including records and precious artefacts -- were destroyed after a fire started in the back of the 19th century building in the early hours of yesterday morning.

Emergency services were called to the cathedral, in the centre of Longford town, at 4.45am -- just hours after Bishop of Ardagh and Clonmacnoise Colm O'Reilly referred to a previous blaze in his Christmas homily.

A resident on nearby Chapel Street raised the alarm after he noticed flames coming from the building. Fire officers battled to save the 19th century cathedral, pumping water from a canal, but it was left in ruins.

Yesterday, Bishop O'Reilly said it was a "dreadful day" for him personally. "It's the kind of nightmare that you never thought you would ever suffer.

"I suppose the only thing you can compare it to is a big bereavement, a serious bereavement, and I'd say that feeling is shared by Longford people, by the priestly diocese and by lay people -- but particularly of Longford," he added.

Gardai will look for clues this morning as to the cause of the fire -- once the building is declared safe. Detectives conducted door-to-door inquiries yesterday.

Inspector Joe McLoughlin said it was a "once in a lifetime" occurrence and all resources had been deployed by emergency services.

"The fire brigade and the gardai responded at the same time, but the fire had already taken hold. It started at the back of the cathedral.

"It's early days, but once the chief fire officer hands the scene over to us and it's declared safe, we will be able to examine it," he added.

Joe Flaherty, managing director of the 'Longford Leader' attended the final Mass in St Mel's, at 10pm on Christmas Eve.

"There was a huge crowd there. The Bishop said the Mass but in his homily he made an analogy to the difficult times facing the church. He talked about a convent in Tubberclair (near Athlone, Co Westmeath) and how, during the penal times, the convent had to be evacuated. English soldiers ransacked and burned it and the nuns had to relocate to a convent in Nun's Island."

Mr Flaherty said it was "very unusual" that Bishop O'Reilly had referred to the burning of the convent, known as Bethlehem, in his homily.

Scores of local people filed past St Mel's yesterday and wept as they saw the extent of the damage to the building, which was constructed in 1840.

Longford Mayor Peggy Nolan received a phone call at 7.30am on Christmas morning about the fire.

"My sister and my father-in-law live very close to it. I got down there at around 7.45am; people were just walking around and not speaking. They're desolate. Longford has lost so much in the past with economic conditions the way they are but the cathedral was always there. It was a beacon.

"I collected my family from the airport. Dara, my granddaughter, it was her first time in Ireland and her mum and dad pointed out the cathedral to her and said 'That's where we got married'. I had planned to bring her to St Mel's to see the crib," she said.

She added that many valuable artefacts were now lost.

"We have no county museum, so we had to store the artefacts at the back of the cathedral. The stone work, the wood, the workmanship, none of that can be replaced.

A sad event, but an opportunity.

Ireland has too many bishops, too many dioceses and too many cathedrals.

Longford is hardly a metropolis. The Bishop, Bishop Colm O'Reilly, a very decent man, is 75 in a fortnight; please God the diocese will merge with another, and the cathedral be replaced by a fine new parish church.