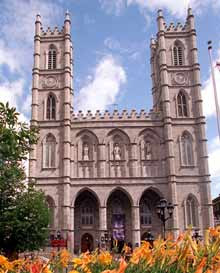 A group of Montreal priests says the house of God is going bilingual — and they're not very happy about it.

Four Roman Catholic priests have written a letter complaining that English has been creeping back into their churches over the past five years.

They're upset that when large assemblies are held at big churches such as Notre Dame Basilica and St. Joseph's Oratory, a large number of immigrants are usually present and the services are bilingual.

The priests say that sends the wrong signal to immigrants in Quebec, which is officially unilingually French.

"Before, there were a few words in English or a [gospel] reading, but now it's bilingual from wall to wall," Rev. André Anctil said.

"The message that's being sent is that we don't consider [French] very, very pertinent," he said. "It's like saying you have a choice between English and French, which is not, according to us, an advisable objective — especially for immigrants."

The priests sent a letter to Archbishop Jean-Claude Cardinal Turcotte in October urging him to put the brakes on the expanding use of English.

But Anctil was disappointed with the response from Jean Fortier, the vicar-general of the diocese of Montreal.

"The answer was to say, 'We'll look at the situation,'" Anctil said. "The vicar-general affirms that the letter provoked a form of dialogue, a reflection, which is good."

But Anctil adds that he doesn't expect much will change.

He noted that Fortier also indicated in his response that "there aren't any actions more important than being alert."

Anctil said communications between the diocese and all parishes in Montreal are now also in French and English, whereas in the past they were only in French.

"It's the same thing for the weekly diocesan review, Haute Fidélité. This review was in French and it's now in French and English," he added.