Pope: at Christmas God is a helpless child, to be freely welcomed to our hearts 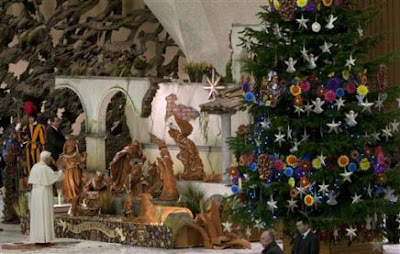 Christmas is at hand and it shows us that God who becomes a child, "is without arms, he is defenceless, because He does not intend to conquer man from the outside, rather to be freely accepted in our hearts and in the world. "

God becomes a child "to overcome the lust for possession, violence."

And may "Christmas gift us serene and profound joy and new courage in the frenetic activity of our busy days, so we may touch the goodness of God."

This was Benedict XVI’s greeting to few thousand people present in the Paul VI audience for his last general audience before Christmas.

The audience also physically marked by Christmas, with the tree and the nativity scene decorating the hall and the notes of bagpipes players from Italy.

Pope Benedict spoke of the birth of Jesus from its historical origin. Originally, he recalled, the liturgical year was centred not on birth but on the resurrection, the victory of Jesus over death. "

"It is the event on which the Christian Faith is founded”.

"The first to say that Jesus was born December 25 was Hippolytus of Rome, in his commentary on the Book of the prophet Daniel, written around 204".

Some note, then, that "in that day they celebrated the feast of the dedication of the Temple of Jerusalem, instituted by Judas Maccabeus in 164 BC. The coincidence of dates would then mean that with Jesus, who appeared as God's light in the night, the consecration of the temple is truly realized, the coming of God on this earth".

"In Christianity, the feast of Christmas took on definite form in the fourth century, when it took the place of the Roman festival of the 'Sol Invictus', the invincible sun; thus highlighting that the birth of Christ is the true victory of light over the darkness of evil and sin. "

But "the intense atmosphere of Christmas - said the Pope - developed in the Middle Ages thanks to St. Francis."

His biographer, Thomas of Celano, "tells how he celebrated the birth of the Child Jesus with untold eagerness and called it the feast of feasts”. From this vision of the Mystery of the Incarnation came the representation of Christmas at Greccio.

"What animated Francis was the desire to experiment the actual event of the birth and communicate its joy to everyone." "The Nativity Scene is the most beautiful of Christmas traditions.

"Greccio gave to Christianity the intensity and beauty of the feast of Christmas, and has educated the people of God to understand its authentic message, its unique warmth and love and worship the humanity of Christ. This particular approach to Christmas gave a new dimension to the Christian faith. Easter had focused attention on the power of God that conquers death, inaugurates new life and teaches us to hope for the world to come. With Saint Francis and his manger the helpless love of God, his humility and his kindness were brought to light, which is manifested in the Incarnation of the Word to men to teach us a new way of living and loving. "

Thanks to St. Francis, "the Christian people have been able to perceive that at Christmas God really became the 'Emmanuele ', God-with-us, from which there is no barrier and no separating distance. In that Child, God has come so close to each one of us, so close that we can call him by name and talk with him in a confidential relationship of deep affection, as we do with a baby. "

At Christmas, "God is without weapons, without force, he does not intend to conquer, so to speak, from without, but rather seeks to be accepted by man in freedom, God becomes a child helpless to overcome man’s arrogance, violence, the lust for possession. In Jesus, God has taken on this poor and disarming condition to win us over with love and lead us to our true identity. "