Call for Pope to visit Ireland and repent over abuse 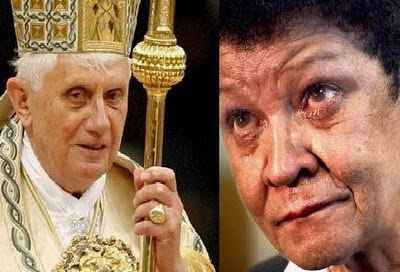 THE Pope must come to Ireland and hear directly from those who have been abused if there is to be any possibility of reforming the institution, a leading survivors’ group has claimed.

In an open letter sent to the Vatican, campaigner Christine Buckley has heavily criticised Pope Benedict XVI for his "apathetic approach" to Ireland’s child abuse scandal.

According to the director of the Aislinn education and support centre, the Pope gravely insulted those who have been abused by discussing the five-volume Murphy Report for just 30 minutes and by failing to meet Bishop Donal Murray to accept his resignation.

Ms Buckley, who was abused during her time at the Goldenbridge industrial school, said any bishop named in the inquiry should be removed from their position to ensure the safety of children can be guaranteed.

And she added that until the Pope arrived in Ireland to repent for the sins which occurred, it would be impossible for the Church to claim accountability for the scandal. "Not alone are you detached from the laity but you are equally detached from your religious leaders who govern in your name.

"It reaffirms what we have known for a long time – that the protection of Church assets is paramount over the slaughtering and raping of children by the holy men and women," warned the letter.

"Many feel betrayed and confused, particularly those who have worked tirelessly and voluntarily for the good of the Church.

"Just as we as children slaved in institutions to produce wealth for the religious orders, so too did many laity who raised millions of euros over the years to swell the coffers of the Catholic Church and spread its influence around the world.

"Now you should spend seven-day repentance here – that is the time that the former Bishop Donal Murray had to wait to meet the Protector of the Faith Cardinal Rei," Ms Buckley added.

Since the Murphy Report was published at the start of the month, the five bishops named in the document have come under increasing pressure over their future.