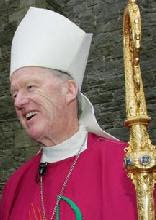 Bishop of Kildare and Leighlin Dr Jim Moriarty has offered his resignation to Pope Benedict XVI.

The announcement was made in the last few minutes following a meeting between the Bishop and Diocesan priests and staff in Portarlington, Co Laois.

Bishop Moriarty was an auxiliary Bishop of Dublin during some of the years in which the Murphy Commission found that the Archdiocese had covered up cases of clerical child sexual abuse.

Bishop Moriarty has said that there were no grounds for his resignation in what was said about him in the Murphy Report.

The Murphy Commission said that Bishop Moriarty could have asked Archbishop Connell to research the files on Fr Edmondus after complaints about the priest had been received by the Diocese.

Dr Moriarty, who is due to retire in two years time, said on Thursday that if it was for the good of the Catholic Church he would step down earlier.

He also emphasised that he had not been criticised in the Murphy Report into clerical child abuse in the Dublin archdiocese.

On RTÉ's News at One, Marie Collins, who was abused by a cleric identified as Fr Edmondus in the Murphy Report, said it was hard to understand why the individual bishops mentioned in the report have not taken responsibility for the cover-up.

In the Report, there was implied criticism of Dr Moriarty for not doing enough to find out all detail about Fr Edmondus when suspicions were brought to his attention.

Separately, a representative of victims of abuse has written an open letter to Pope Benedict XVI challenging him to come to Ireland to listen to them.

Christine Buckley, who represents victims of child abuse in Catholic institutions, has told Pope Benedict she is utterly dismayed at his 'apathetic approach' to heinous acts of depravity perpetrated on children by clergy and religious and covered up by Cardinal Desmond Connell and other bishops as revealed in the Murphy Report.

In the letter, she challenged the Pope to come to Ireland to listen to the pain of all victims of abuse.

Meanwhile, Cardinal Seán Brady has said Christmas brings fresh joy and hope to many who are greatly challenged by the recession, unprecedented flooding and the horrendous scandal of child abuse.