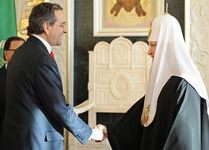 All Orthodox churches in Russia will raise funds to help Greece mitigate the social impact of the euro zone crisis, Patriarch Kirill of Moscow and All Russia announced on Thursday last.

"We are currently establishing relations between our church charitable organizations and the Church of Ellada so that the Russian Church can take part in this good work of helping the needy in Greece," the Patriarch said at a meeting with the leader of the New Democracy party of Greece, Antonis Samaras, in Moscow on Thursday.

Greece's current problems are "taken to heart" in Russia, the patriarch said. The Russians think highly of help being given by the Greek Church to those hit hardest by the crisis, he said.

He credited relations between the Russian and Greek Churches with being traditionally warm and "some of the strongest ties between our countries."

"Political situations come and go and change, but those ties, which span centuries, always survive. Orthodoxy is an important factor of national self-identification both for Russians and for Greeks," he said.

He mentioned that recently a relic of St. Demetrius of Thessaloniki and the Cincture of Our Lady were brought to Russia for veneration by Orthodox believers.
"The Russian people are very responsive to relics being brought over, and millions of people, in spite of frost or cold, queue for hours to be able to touch those relics," he said.

"No political rally or sporting event brings as many people together as the relics that are brought here do. While this remains the case we will have hopes for the future," Kirill said.
EDITED BY Sotto Voce