History is Made Again as U.S. Ordinariate Receives First Parish 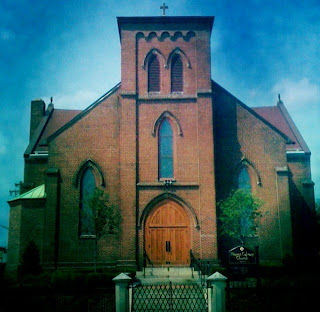 While parishes have previously been received into the Catholic Church in anticipation of the new Anglican Ordinariate, history was made on Sunday, January 22 when the first parish was received by the Ordinary of the Ordinariate of the Chair of St. Peter.
Since the Ordinariate's canonical structure is still being established, the parish remains under the jurisdiction of the Archdiocese of Baltimore for the time being.

Mount Calvary Episcopal Church, who had voted to join the Ordinariate in October 2010, had to wait until their property issue with the Episcopal Diocese of Maryland was settled.
Fortunately, they were eventually able to keep their building and ended up as the first parish received by the new Ordinary. Their reception took place Sunday morning with a packed out church of parishioners and supporters from the Episcopal and Catholic world in attendance.

Reverend Jeffrey Steenson, the newly selected Ordinary, made it clear during the Mass that he was operating by direction of Cardinal-designate Edwin O'Brien, Apostolic Administrator for the Archdiocese of Baltimore. He will be officially installed as the Ordinary on February 12.

The Solemn Mass of Confirmation and Reception into the Roman Catholic Ordinariate of the Chair of St. Peter included the best of Anglican hymnody, anthems and chant superbly presented. Lasting more than two hours, for those who appreciate the contribution of Anglican liturgy and music, this was a time when heaven and earth touched.

During his homily, Father Steenson likened the beginning of the Ordinariate to a newly designed airplane that has yet to be flown. "We still don't know if all the equipment is going to work correctly right away," he shared with a grin.

He went on to say that the Ordinariate is being built on an "abundance of faith, hope and charity. We hope these things will see us through in the Ordinariate."

One of the key themes Fr. Steenson continues to highlight is the Ordinariate as a means of evangelization.

"We are called to do the work of the evangelization of souls; the call to be fishers of men."

Addressing the parishioners of Mount Calvary who were about to be received, he said, "Many of them may be wondering (about the rite of confirmation), 'Haven't I done this before?'"

To answer the question, he took the congregation back to the third century. Even in the early church, there were Christians who had left the Catholic Church, separated from those who gathered around Peter and His Successors.

During that century, when some wanted to return to the Church, a discussion ensued by the bishops of the time whether they should be allowed to repent and return. St. Cyprian, St. Dionysius and other influential bishops felt that those who have fallen away should return as if they had never been a part, through baptism.

Pope St. Stephen resisted their pressure, remaining committed to the vision of reconciliation, that nothing was more important than rejoining separated brethren. He declared that they could be reconciled and instructed that, because of their break in the relationship, they should have hands laid on them as a sacramental sign of the love and grace of the Holy Spirit.

As Fr. Steenson explained, this was continuing to happen, even today; Pope Benedict initiated the Ordinariate as an act of enormous pastoral kindness toward those who desired to come in.

At the end of his remarks and just before receiving the members of the parish, he took time to thank Bishop Sutton of the Episcopal Diocese of Maryland for "his gracious gift," regarding the settlement with Mount Calvary on the building.

"I have been a bishop and I know what it cost to do this," Steenson said, "and it cost him a lot."

Talking with Jason Catania after Mass, he expressed his great joy that they have finally been received. "These great people have been through so much and have hung in there," he said, "and I'm so glad we've made it."

Catania and his associates will be among those candidates who will now begin pre-ordination formation toward being ordained as Catholic priests. In the meantime, they will continue to serve in administrative capacities with the parish until the direction of Father Carleton Jones, OP, who has been appointed as their chaplain.

Present for the Mass were many of the sisters from All Saints Sisters of the Poor in Catonsville, MD. They made national news in 2009 when the Anglican convent was received into the Roman Catholic Church. They were later canonically established as a religious order within the Archdiocese of Baltimore.

The All Saints Sisters' relationship with Mt. Calvary goes back to 1872 when the parish's rector, Joseph Richey, invited three sisters to come from England and help them serve the poor in Baltimore.

The sisters were all smiles during and after the Mass, as the parishioners with whom they have loved, worked and worshiped now joined them in the Catholic Church.

While Mount Calvary has maintained a national reputation over the years as a strong Anglo-Catholic parish with high-church liturgies, one cannot talk of them without highlighting the incredible work they have done with the poor in heart of the city.

In addition to other projects, the parish and the sisters began the Joseph Richey House in 1980, an in-patient and home care hospice. Then in 2011, they began a pediatric hospice called Dr. Bob's Place - the only hospice in the region dedicated to children.

As a side-note, following the Mass, Fr. Steenson also conducted the first baptism of the Ordinariate. Solemn Evensong and Benediction of the Blessed Sacrament was held later in the day, with Fr. Eric Bergman of the St. Thomas More Society in Scranton officiating and Fr. Dwight Longenecker as the preacher. We will be posting a story on the evensong at future time.
EDITED BY Sotto Voce