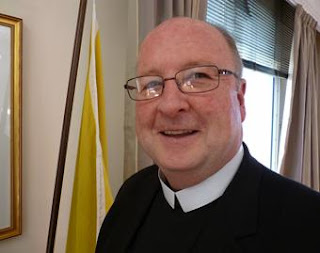 The Israeli-built wall between Jerusalem and the West Bank is deterring staff and students from attending Bethlehem Catholic University, officials from the school say.

“We lose students but we also lose faculty who have been teaching at the University and who come from Jerusalem but don´t want to go through that humiliation every day,” Brother Jack Curran, the university’s Vice President for Development, told CNA on Jan. 18 during a two-day visit to Rome.
“The young people are very resilient and are willing to put up with a lot but it does concern us for the future,” he said.

The barrier is a 26 foot wall erected by Israel to separate itself from the Palestinian-controlled West Bank.
Israel says the wall protects them from Palestinian terrorism.
Opponents of the wall say it breaks international law and illegally annexes parts of Palestinian territory.
Bethlehem Catholic University sits close to the wall on the Palestinian side, but many of its students come from East Jerusalem, which lies on the Israeli side.
“There are students, now about 20 percent of students, who go through the checkpoints of the wall every day, twice a day, coming and going,” explained Br. Curran, an American from upstate New York, who has been in Bethlehem for nine years.
“Bethlehem is the only Catholic university in the Holy Land, so any Christian or Catholic students in Jerusalem who want to go to a Catholic university have to do that,” he explained.
Br. Curran said that many of the students find the routine of checkpoints and searches “wearing and tearing on their spirits.”
“They tell us the hardest part is not going through the wall but the thoughts about what happens when you’re on your way to the wall: ‘Will I be strip searched or taken off the bus and forced to sit in the sun for an hour or two, or will it be that I’m waved through?’”

Bethlehem Catholic University was founded in 1973 as a joint venture between the Vatican and the De La Salle Christian Brothers.
Initially the school only had 112 students enrolled, but this year it has over 3,000 attending classes.
Br. Curran finds his students are remarkably resilient in the face of adversity.

“Amazingly, their spirits are still very positive and upbeat and they come every day,” he said. “They have a choice to come or not. But they do come and we’re grateful that they do.”
Br. Curran is more concerned about losing staff members who find the extra difficulties created by teaching in Bethlehem simply “too much for their spirits to bear.”
He offered the example of Palestinian academics who are not allowed to fly out of Tel Aviv Airport in Israel to attend international conferences but, instead, have to travel to Amman, Jordan.
The trip to Amman involves an overnight stay on both the outgoing and return journey.
“It practically doubles the expense of any travel that has to happen, and so when a faculty member has to think about going to a conference they have to think about the extra burden,” he explained.
“Meanwhile, the staff who live in Jerusalem have to go through that wall twice a day. And after a few years of doing that many decide to look for a job elsewhere, regrettably so.”

Br. Curran said Pope Benedict XVI’s visit in 2009 was extremely helpful to the university because he said “tough things” to the leaders in Israel and Palestine.
In his meetings with Vatican officials in recent days, Br. Curran has been urging the Holy See to continue speaking out, because “their words do have an impact.”

“We look forward to the rest of the international community to be likewise critical of the injustices wherever they occur, whether they are on the Israeli side or the Palestinian side,” he stated.

“In many ways, it seems to me that it boils down to issues of human rights – justice – and then when these are addressed, we will see peace and prosperity being possible.”
EDITED BY Sotto Voce