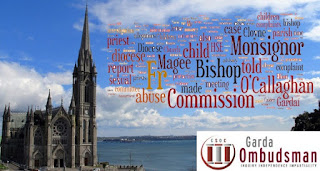 The Garda Síochána Ombudsman Commission (GSOC) has moved a step closer towards launching an investigation into the Garda handling of cases criticised in the Cloyne report.
Following six months of discussions with the Murphy Commission, the GSOC has recently received the full, unredacted, or unedited, version of their report into the Catholic diocese.

A spokesman for the GSOC said yesterday: "We have now received the full unredacted version of the report and the commission is now examining its contents."
He declined to make any further comment until this process was completed.

The Cloyne report investigated how the hierarchy and statutory authorities, including the gardaí, handled complaints into alleged sexual abuse committed by clergy in the Cork diocese.

The Murphy Commission said it was "very concerned" at the role of gardaí in three cases, including one where no investigation was carried out and another where a statement from a victim was left forgotten in a drawer.

The commission also expressed its shock over "vanishing" interview notes of a complainant and a failure to keep proper records.

Overall, the commission said "most" gardaí carried out their tasks "well" and treated the complainants with "compassion and dignity".

The report was published last July, but sections, including the names of priests and gardaí criticised, were blacked out for legal reasons.

After the publication, Justice Minister Alan Shatter referred the report to the GSOC and asked it to take whatever action it deemed necessary.

The Garda watchdog quickly realised there were problematic "procedural issues" that had to be dealt with.
This centred on whether or not it could get access to information provided to the commission in confidence.

Without the full report, the GSOC would not be able to identify the gardaí criticised and could not conduct an investigation.

Investigators within GSOC are examining the full report and will submit their report to the three-person commission which heads GSOC for a decision.

The indications last year were that once GSOC had got the full report that an investigation would be set up.
But two of the three people leading the commission changed at the end of last year, so it is not clear if that position has changed.

It was thought that any investigation would be a "public interest" inquiry under Section 102.4 of the Garda Síochána Act 2005.
This allows the commission to set up an inquiry without having received a complaint.

Under this section, GSOC can investigate "any matter that appears to it to indicate that a member of the Garda Síochána may have committed an offence or behaved in a manner that would justify disciplinary proceedings".

Any gardaí criticised in the report who have retired can not be disciplined.
EDITED BY Sotto Voce