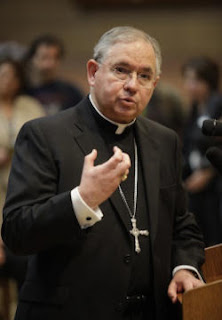 Archbishop Jose H. Gomez of Los Angeles urged lay Catholics to defend the faith after the Department of Health and Human Services refused to reverse a contraception mandate set to take effect in Aug. 2013.

“In this case, the government is imposing a narrow, radically individualistic idea of religion,” Archbishop Gomez said in a column published this week in his archdiocesan newspaper, the Tidings.
On Jan. 20, Department of Health and Human Services secretary Kathleen Sebelius announced that the administration would not expand a religious exemption for employers who object to its “preventative services” mandate.
The policy, originally introduced in an Aug. 2011 interim rule, requires health insurance plans to cover contraception – including drugs that cause abortion – and sterilization free of charge.

To qualify for a religious exemption under the policy, religious organizations must employ and serve primarily members of their own faith and must exist for the purpose of teaching religious values.
Many religious organizations objected to the rule, however, saying that they would not qualify because they provide education, health care and other services to people of all religions. But the Obama administration dismissed their requests, saying that the religious exemption would not be expanded.
“As many have noted,” Archbishop Gomez said, the exemption for religious groups is so narrow that “much of what Jesus Christ did would not qualify as a 'religious' ministry.”
Everything the Church does, including healthcare, education and ministry to the poor, is “religious,” he emphasized.
“All of our ministries and institutions are motivated by our love for God and our mission to spread the Gospel.”
“We don't do these things,” he added, “because we are social workers or philanthropists. We do them because we are disciples.”
Archbishop Gomez said that what he finds most disturbing about the recent announcement is the government's attempt to redefine Catholic charities, hospitals and colleges as non-religious institutions.
The administration is “presuming to have to competence and authority” to define what “religious faith is and how believers should express their faith commitments,” he warned.
“These are powers our government has never before assumed itself to have.”
He called on all Catholics, especially the laity, to “step up to their responsibilities for the Church's mission” and “to be leaders in helping to shape the values and moral foundations of America's future.”
The archbishop also noted the “prophetic advice” that Pope Benedict gave in his Jan. 19 address to U.S. bishops.
The Pope told the bishops of “the need for an engaged, articulate and well-formed Catholic laity” that has the “courage to counter a reductive secularism” which is determining “the future of American society.”
Archbishop Gomez encouraged Catholics to pray for the nation's leaders and entrusted his intentions to Mary Immaculate, Patroness of America.
EDITED BY Sotto Voce