Benedict XVI meets with heads of all dicasteries 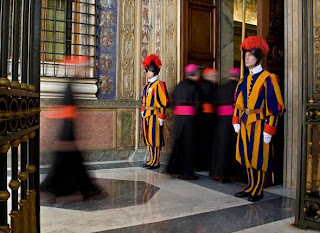 Vatican sources have stated that the plenary assembly dealt with problems relating to internal communication and the phrasing and checking of documents.
These types of meeting, where all Vatican “ministers” are called together, are scheduled haphazardly.
In recent times they have tended to take place twice a year so as to allow a broad discussion of topics on the agenda.
The meeting in question was held in the Vatican’s Bologna Hall.
The last meeting of its kind took place on 13 June 2011 and was defined as a meeting to coordinate the Curia.
The last meeting of this breadth and with the same levels of participation, was held on 12 November 2010.
One of the issues discussed, was the dicastery for the New evangelisation, led by Mgr. Rino Fisichella, which at the time was still in the process of being established.
EDITED BY Sotto Voce

Pope Benedict XVI needs to implement a better structured meeting of the heads of all dicasteries.

The Vatican should have a syllabus prepared for these meetings with specific topics to be discussed. Additional topics -- if there are any -- can be addressed after the topics on the syllabus have been discussed.

Such a format will enhance the results of these meetings, as they will no longer be ambiguous and divisive.

Somehow the name of the hall seems so very appropriate! In the US it is popularly pronounced "baloney."

Somehow the name of the hall seems so very appropriate! In the US it is popularly pronounced "baloney."