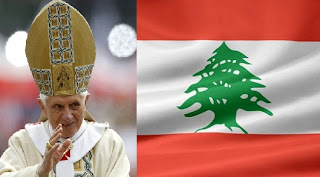 A visit by Pope Benedict XVI to Lebanon later this year is “very possible,” according to the Vatican’s official spokesman.
The Pope would use the visit to deliver a document – known as an apostolic exhortation – that is the fruit of the discussions that took place at last October’s Synod for the Middle East.

“In the context of the publication of a synod document, it is very possible and reasonable for the Pope to go to Lebanon and deliver this message,” Vatican spokesman Fr. Federico Lombardi, S.J., told CNA on Jan. 23.
“Lebanon is certainly a country that desires the Pope’s presence. Given that the Pope has already been to the Holy Land, Lebanon is a place that would be an option to host the Pope for this purpose,” Fr. Lombardi said.
The Italian media is already speculating that the Pope will travel to the country in mid-September. Possible dates include Sept. 13, the Feast of the Exultation of the Holy Cross, and the following weekend, Sept. 22-23.
Pope Benedict could make stops in Lebanon’s capital city of Beirut and the seat of the Maronite Catholic Patriarchate, Bkerké, as part of his trip.

“Well that’s very much the hope there at the moment,” said Monsignor John Kozar, president of the Catholic Near East Welfare Association, who recently visited Lebanon.
“There is a lot that would have to go into such a decision, and there are a lot of parties that will have to weigh in on that,” he told CNA, adding that a papal trip “certainly would be a most welcome sign to the people and to the Church there.”
Just over a quarter of the Lebanese population is Catholic, with the majority of those belonging to the Maronite Catholic Church, an Eastern Church in communion with Rome.
Blessed Pope John Paul II made a two-day visit to Lebanon in 1997 to sign the apostolic exhortation “A Hope for Lebanon,” which drew together the work of the Special Assembly for Lebanon of the Synod of Bishops in 1995.

A papal visit later this year would be Pope Benedict’s first journey to the Middle East since the emergence of the “Arab Spring,” a series of popular uprisings across the region that have toppled a number of dictatorships over the past year.
EDITED BY Sotto Voce