Father Bob Maguire fears church will close the door on him 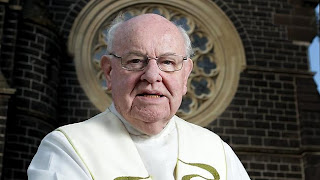 FATHER Bob Maguire fears he won't be welcomed back at the church he served for almost 50 years after he holds his final Mass on Sunday.
Despite a public battle to keep the popular clergyman at South Melbourne's St Peter and Paul's Church, the Catholic Church isn't reversing its decision to force Father Bob to retire because of his age.
At 77, Father Bob is unsure what he will do now but a priority is to keep his foundation that helps the needy running and possibly buy a campervan to go travelling around Australia.
"I suppose that's why they send people to nursing homes so they can have rules and structure," he said.
The maverick priest said incoming parish priest Father Julian Messina might want a fresh start without him lingering in the background.
"They might think I'm a distraction and restrict people from moving on," he said.
"He (Fr Messina) shouldn't expect hugs and kisses straight away you have to earn that respect. That's the only way I lasted so long, we fell in love (with his church-goers)."
Fr Bob said his last service would be like any other one and he was "worn out with sadness".
"I don't care if Lady Gaga is there. I'm going to do what I've done for 48 years. I'd rather be Bob, Parish Priest of St Peter and Pauls, rather than any other title given to me," he said, referring to him being called a celebrity.
"We are really hurting but we are not fatally injured. But I don't want to be bitter Bob."
Fr Bob will move into an old real estate office with his dog Franklin where he will live and run the Fr Bob Maguire Foundation until a home is found.
Despite the church's ruling, Fr Bob still wants to have his own parish.
Fr Bob, arguably Victoria's most outspoken priest who now has a cult following, was named Victorian of the Year in July last year.
EDITED BY CW Team