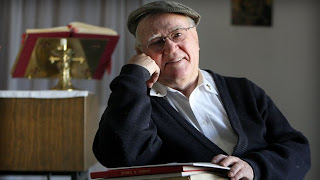 DETERMINATION to see Mary MacKillop become Australia's first saint and tireless work for the Catholic Church have earned Father Paul Gardiner an OAM.
Father Gardiner, 88, of Penola, started researching Mary MacKillop's life in 1983.
He served as Postulator for the Cause of the Canonisation of Mary MacKillop from 1985 to 2008.
"I sometimes wondered in Rome, working on this day after day, year after year, whether anyone else was interested in this, but we got there eventually," he said.
He researched and wrote Positio for the Cause of Mary MacKillop, a three-volume, 1500-page book on the life and miracles of Mary MacKillop.
This work led to her earning the title Venerable, her beatification and eventual canonisation.
Father Gardiner celebrated Australia Day with family and friends in country Victoria and said he considered being awarded the Order of Australia Medal more a recognition of the work of St Mary MacKillop than of his efforts to have her canonised.
"She was, from a human point of view, a very admirable person and if people imitated her behaviour - apart from her religious depth and her faith in God - if people imitated her ordinary way of dealing with her fellow humans, I think it would be a much better Australia," he said.

Sr Maria Casey, from NSW, who assisted Father Gardiner, also has been awarded an OAM.
EDITED BY Sotto Voce