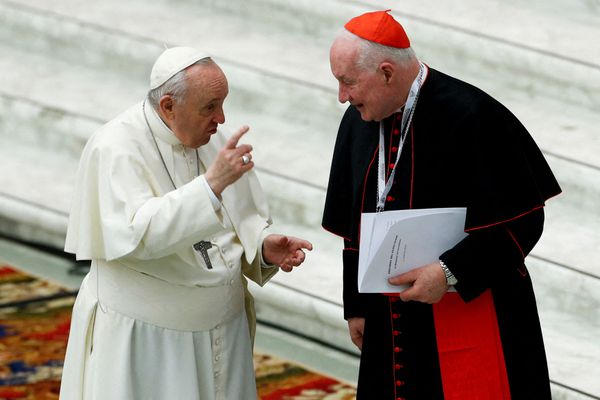 The Vatican will not investigate the details of a complaint against Canadian Cardinal Marc Ouellet, who is facing allegations of sexual assault as part of a class-action lawsuit in his native Quebec.

Pope Francis has decided there is not enough evidence to initiate a canonical investigation, the Vatican said in a statement released Thursday by Matteo Bruni, the director of the Holy See Press Office.

Such an investigation would determine whether church law had been violated.

Cardinal Ouellet is one of Canada’s most prominent prelates, a Vatican insider who has been touted as someone who could be elected pope.

The class-action lawsuit involves more than 100 victims, who claim they were sexually assaulted at various times beginning in the 1940s by at least 85 members of the diocese of Quebec City, where Cardinal Ouellet was an archbishop before taking a post at the Vatican.

In a statement of claim filed Tuesday, a Quebec City woman alleges that, at public events between 2008 and 2010, the Cardinal inappropriately rubbed her shoulders, hugged her, kissed her on the cheeks and slipped his hand down her back, close to her buttocks. The allegations have not been tested in court.

The woman wrote directly to Pope Francis to complain about Cardinal Ouellet at the end of January, 2021. The pontiff appointed a Jesuit priest, Jacques Servais, to investigate.

The Vatican statement quotes Father Servais as saying that “there is no supported reason to open an investigation for sexual assault.”

Father Servais is also quoted as saying that the woman did not bring forward an accusation that would “provide ground to such an investigation,” either in her written complaint or in a Zoom video testimony to him.

In her Canadian court claim, the woman says Father Servais appears to have little grasp of the intricacies of dealing with allegations of sexual abuse, and that he might not be impartial because he knows Cardinal Ouellet.

The woman, identified in court papers only as F., was a pastoral intern in her early 20s at the time of the alleged assaults, while the Cardinal was in his mid-60s. Months later, he left for Rome to become Prefect of the Congregation of Bishops, the Vatican office responsible for the appointments of bishops.

In her statement of claim, F. says that, when she mentioned her unease about the Cardinal to others, she was told that he was “friendly” and that she was not the only woman to have this particular issue with him.

She also alleges that another priest, Léopold Manirabarusha, sexually abused her between 2016 and 2018, including by forcing her to perform oral sex on him.

The statement of claim says being assaulted by Father Manirabarusha led the woman to consult an advisory panel for victims of church sexual abuse. She described Cardinal Ouellet’s alleged unwanted advances without disclosing his name, and was told that her experience with him constituted sexual assault.

She complained about Father Manirabarusha earlier this year, and three months later he was suspended from his church ministry.

Under Canada’s Criminal Code, assault, including sexual assault, occurs when a person intentionally applies force to someone else without their consent.

In the Catholic Church’s Code of Canon Law, sections 1395 and 1398, which deal with sexual assault, were updated last year to recognize that adults – not only minors – can be victims of those crimes.

The sections say a cleric can be dismissed for abusing his authority in violation of the Sixth Commandment, which prohibits adultery.

Justin Wee, a lawyer for F. and the other class-action plaintiffs, said the only contact F. had had with Vatican investigators was the Zoom meeting with Father Servais, in March, 2021.

“Our client is very disappointed, but she is still determined to prove that what she revealed is true. So, the next step will be to prove it in a civil court instead of a canon law trial,” Mr. Wee said.

He added that F. is wondering why it took the Vatican so long to announce its decision, if the evidence was insufficient.

Father Servais is the director of Casa Balthasar, a religious house in Rome where Cardinal Ouellet has taught.

The two share an interest in the late Swiss theologian Hans Urs von Balthasar, and both are members of the Lubac-Balthasar-Speyr Association, which operates Casa Balthasar.