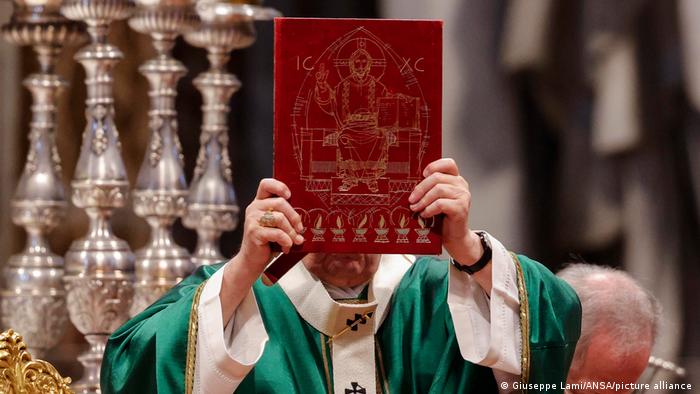 The Vatican on Thursday issued a terse statement on the progressive German Catholic movement known as the "Synodal Path."

The statement warned German reformers they had no authority to instruct bishops on moral or doctrinal matters.

Moreover, the Holy See made clear that it views the Synodal Path's calls for addressing homosexuality, celibacy, and women in the Church as divisive and warned those calls could cause a fracture.

Members of the Synodal Path, a group made up of equal numbers of German bishops and lay Catholics, meet regularly. In February, they called on the Catholic Church to allow priests to marry, women to become deacons, and same-sex couples to receive the Church's blessing.

The Vatican, or Holy See, said the Synodal Path, "does not have the faculty to oblige bishops and the faithful to assume new forms of governance and new approaches to doctrine and morals."

To do so, read the statement, "would represent a wound to ecclesial communion and a threat to the unity of the Church."

Speaking on behalf of the Synodal Path, Chairman of the German Bishops' Conference Georg Bätzig and President of the Central Committee of German Catholics (ZdK) Irme Stetter-Karp, said they were "astonished" at the "poor form" the Vatican had shown by releasing such a statement to the public without putting a name to it.

Both Bätzig and Stetter-Karp vowed there would be no "German deviation" but said it is their "responsibility to clearly point out where change is needed." The two say the problems they are addressing are not unique to Germany, but common to dioceses all over the world.

Bätzig and Stetter-Karp voiced "bemused regret" over the fact that no direct communication with the Vatican had yet taken place.

On Saturday, the German Catholic women's movement Maria 2.0 (Mary 2.0) said church leaders should not fear confrontation with the Vatican.

Theologian Maria Mesrian, who represents the group, told Deutschlandfunk Radio that the bishops will have to "decide whether they want a living church in Germany or whether they would rather lead a dead institution."

Mesrian said the Vatican is all about "power and the unity of the omnipresent church."

Hundreds of thousands leave Catholic Church over lack of reform

The German group, formed in the wake of woefully mishandled clergy sexual abuse scandals, also calls for ordinary Catholics to have more of a say in how the Church operates. The Vatican again warned that if national Churches chose to pursue their own paths they would, "weaken, rot and die."

In 2021, 360,000 Catholics formally left the German Church— which has 22 million members in the country and rakes in €6.45 billion ($6.58 billion) in church taxes every year — in protest at corruption and abuse

Although progressive European and US Catholics would likely be willing to support progressive issues, such as blessing same-sex relationships and ordaining women, Rome would risk backlash with fast-growing South American and African congregations.

In 2019, Pope Francis warned German bishops against the temptation to change for the sake of appeasing certain groups or ideas. Observers speculate that the reforms could leave the Catholic Church open to a splintering, similar to the one which befell the Anglican and Protestant Churches after they introduced similar changes.

According to the Vatican statement, any changes to teaching on morals or doctrine must be taken up by the Church's own synodal path. The Holy See said preliminary consultations are already being held globally in preparation for a meeting of bishops next year in Rome.

The next gathering of the German Synodal Path is scheduled to convene on September 8-10.