Why the Vatican has intervened again on the German synod 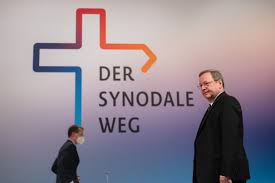 The Vatican’s move to rein in the German synodal pathway is highly unusual but reflects the growing concern in Rome about what has been happening in Germany. It also shows that a lid can no longer be kept on the internal tensions that the synodal reforms have unleashed.

The German synodal path has been forging ahead with discussions on the hot-button issues in the Church including the use of power, women’s ministry, the role of the priest and sexual teaching. In each of these areas, the synodal path is pushing for major changes and, from 8-10 September, is due to meet for its fourth assembly. Unsurprisingly, the German's synodal path has met a lot of resistance.

Here are three observations about the Vatican’s latest move.

First, the statement on Germany was released from “the Holy See” without being signed by a Vatican department or individual. Normally, it would be expected that the Synod office, or the departments for doctrine or bishops, would have been the ones to make an intervention of this kind as the German discussions would fall under their remit. We saw this when the Vatican’s doctrine office intervened to ban the blessings of same-sex couples, a move widely interpreted as an attempt to prevent the German church moving down this path.

The latest intervention seeks to articulate the “general position” of the Church’s central government with regards to the German synodal path and therefore increases the pressure on Germany to change track. The anonymous statement could also be the result of efforts by some in Rome for a formal, or institutional, warning by the Holy See to the German synod. The push for this kind of intervention comes despite Pope Francis’ 2019 letter to the German synod, which offered support to the process but urged them not to go it alone. Although the Pope is not cited in the latest statement, it would not have been released without his approval.

Second, this statement suggests that Rome feels Germany has not been listening to concerns expressed about the synodal pathway and believes firmer action is necessary. The fear is that Germany is trying to “go it alone” by running ahead with reforms which need to be agreed at a universal level.

For Francis, the synod process needs to be genuinely open to the movement of the Holy Spirit, which is discerned through the voices of the People of God. The results cannot be predetermined. It is noticeable, therefore, that the Vatican statement starts with the line “in order to safeguard the freedom of the People of God”, something which reflects the Pope’s worry that the German synodal path has become disconnected from the people in the pews.

“The problem arises when the synodal path comes from the intellectual, theological elites and is much influenced by external pressures. There are some dioceses where the synodal way is being developed with the faithful, with the people, slowly,” he told a group of Jesuit editors recently.

In other words, the fear is that the German synodal path has been driven by particular groups who have a pre-planned agenda for reform and could be succumbing to the temptation of lay clericalism.

The criticisms made of the synodal path by Cardinal Walter Kasper are also an important factor. The German prelate is sometimes described as the “Pope’s theologian” and was closely involved in the family synods, which opened the way for divorced and remarried Catholics to receive communion. Cardinal Kasper is far from being a hardliner, and his views on the German synod will have been taken into account by Francis.

Third, the statement from the Vatican comes as bishops’ conferences are sending in reports following their listening processes which are part of the global synod. Reports suggest that a number of local churches are raising some of the questions addressed by the German church, particularly regarding the role of women and the greater inclusion of the laity in decision-making. The latest move on Germany could be read as an attempt to draw a red line around the global synod process, 15 months before the 2023 summit in the Vatican.

“It would not be lawful to initiate in the dioceses, prior to an agreed understanding at the level of the universal Church, new official structures or doctrines, which would constitute a violation of ecclesial communion and a threat to the unity of the Church,” the statement says.

The danger with this paragraph is that it could be read as an attempt to shut down discussions at the local level because, in the end, Rome will make all the decisions. This does not suggest an attitude of dialogue between the Holy See and the local churches but top-down decision-making.

There is also a problem with Rome pushing the anti-German synod line too far, given that the Pope opened the global synod and asked everyone to contribute to the most ambitious consultation process ever embarked on. The genie is already out of the bottle.

Nevertheless, the latest Vatican statement might do something to assuage the concerns of the synod doubters (a number of them priests) who don’t want to engage with the process because they think it is all about “changing doctrine”.  Francis has repeatedly insisted that synodality is fundamentally a spiritual process of listening and discerning the will of the Holy Spirit. It means that any reforms can only flow from this spiritual journey and is challenging those at opposite ends of the church’s spectrum of views.

All of this is a turbulent and messy process. The German synodal organisers have responded to the Vatican statement by repeating that they are not seeking to “follow a special German path”. Those involved in the German process have repeatedly stressed they have no intention of harming unity only want to put forward proposals that can enrich the entire Church. But there was also irritation with the latest Vatican missive, which they said “is not a good example of communication within the Church if statements are published which are not signed by name." Neither must it be forgotten that the German synodal path is a response to the devastating sexual abuse scandals and an attempt to tackle the institutional and systemic causes that led to the abuse and its mishandling by church authorities.

The plates are flying in disagreement, and we are likely to see more, not less of this over the following months. Francis is unlikely to be too worried. Crises present opportunities, and new paths for the Church can be found out of the tensions. Buckle up for the ride.