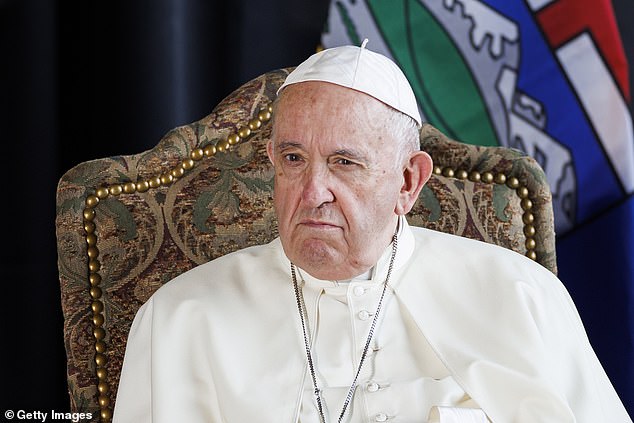 The Pope secretly allowed investigators to bug a telephone belonging to a London-based financial broker charged with defrauding the Holy See, a report has revealed.

Documents leaked from the Vatican allegedly demonstrate that Pope Francis gave the go-ahead to investigators to tap phones, intercept emails and even make arrests without first asking British judges for approval.

According to The Sunday Times - which reports that it has seen the documents - the Vatican's Office of the Promoter of Justice targeted millionaire Raffaele Mincione, an Italian fund manager and consultant at the centre of a Vatican corruption trial.

Mincione is one of ten defendants - including other high-rolling London financiers and church employees - that Vatican prosecutors allege were engaged in various crimes such as embezzlement, fraud, money laundering and corruption.

The former right-hand man to Pope Francis Angelo Becci is the highest-profile defendant in what has been dubbed as 'the trial of the century'.

All the defendants involved in the trial have denied any wrongdoing.

Responding to The Sunday Times, a spokesman for the Vatican said: 'The legitimacy of the investigations and the correspondence of the Vatican judiciary system to the principles of fair trial has been recognised by various foreign courts.'

Since becoming pope in 2013, Francis has vowed to clean up the Church's finances, dogged for decades by scandal.

After a 2019 raid on the offices of the Secretariat - the Vatican's most important department charged with general affairs and diplomacy - Francis stripped the body of oversight of its own funds, handing that responsibility to others.

The complex case alleged by prosecutors paints a picture of dubious, risky investments involving millions of dollars of Vatican money, little or no oversight, and double-dealing by outside consultants and insiders trusted with the financial interests of the Secretariat.

The primary defendants are 'actors in a rotten predatory and lucrative system, sometimes made possible thanks to limited, but very incisive, complicity and internal connivance,' prosecutors have said previously.

The scandal is particularly embarrassing because funds used for risky ventures, including a disastrous 350-million-euro (£300million) investment in a 17,000-sq metre London property in the upmarket neighbourhood of Chelsea, came from the Peter's Pence, an annual fund for the pope's charities.

The current case dates from 2013, when the Secretariat borrowed more than $200 million (£145million), mainly from Credit Suisse, to invest in a Luxembourg fund managed by Mincione.

Half was intended for stock market purchases and the rest for part of the London building.

According to The Sunday Times - which reports that it has seen the documents - the Vatican's Office of the Promoter of Justice targeted millionaire Raffaele Mincione (pictured, centre, in London in 2017), an Italian fund manager and consultant who is as the centre of a Vatican corruption trial

Mincione, prosecutors allege, used the money to invest in high-risk ventures over which the Church had no control. By 2018, the Secretariat had already lost millions and tried to pull out of the deal.

But another London-based financier, Gianluigi Torzi, brought in to broker the purchase of the rest of the building and cut ties with Mincione, instead joining forces with him, say prosecutors.

Torzi arranged for the Holy See to give Mincione £40million to buy out the financier's share of the London property, but allegedly inserted a clause into the deal that gave himself control of the building through voting rights.

Torzi is accused of demanding 15 million euros to relinquish control.

Mincione and Torzi were helped, prosecutors claim, by Enrico Crasso, a former financial consultant to the Secretariat, and employee Fabrizio Tirabassi, both of whom face charges including fraud.

Also implicated are two former top officials within the Vatican's financial regulator, including its ex-president, Swiss lawyer Rene Bruelhart, whom prosecutors say did not do enough to protect the Secretariat's interests.

During seven hours of questioning, Mincione said the case was 'the first time I find myself in this kind of situation'. He said in his 35-year-career, he has never recieved a fine, or a complaint from 'the banks that regulate our business'.

The Sunday Times revelations came ahead Pope Francis' visit to a former residential school in Canada on Monday, where he is expected to make a historic personal apology to Indigenous survivors of abuse committed over decades at the Catholic-run institutions.